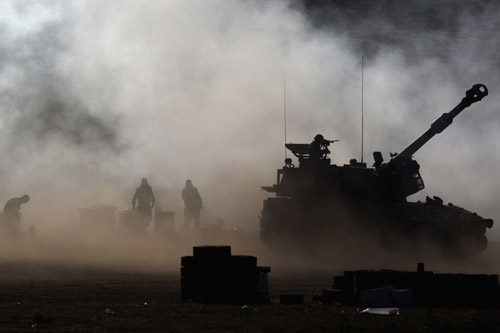 Troops will leave Gaza by 8am cease-fire: Israeli military

A 72-hour humanitarian ceasefire brokered by Egypt has gone into effect in the Gaza Strip and Israel. The start of the truce at 05:00 GMT on Tuesday was preceded by a barrage of rockets from Gaza, with air raid sirens howling throughout southern Israel, including in the cities of Ashdod, Ashkelon and Beersheba, as well as around Jerusalem.

Israel also launched air strikes on Gaza City and on southern and central parts of the Palestinian territory in response to the rockets. from Gaza, said he could hear the Israeli air strikes just before the clock struck 8am local time. “We haven’t heard anything outgoing or incoming since 8am. We can still hear the buzz of drones in the sky, though,” Tyab said. As well as brokering the truce the Egyptian government invited Israel and the Palestinians to attend indirect talks in Cairo aimed at securing a permanent end to violence that has killed 1,865 Palestinians as well as dozens of Israeli soldiers.

Israeli ground forces were also expected to withdraw completely from Gaza by the time the ceasefire began, Lieutenant-Colonel Peter Lerner, Israeli military spokesman, said. Lerner said troops would “be redeployed in defensive positions outside the Gaza Strip and we will maintain those defensive positions”. He said the army overnight destroyed the last of 32 tunnels located inside Gaza. “Today we completed the removal of this threat,” he said. Three similar agreements have collapsed since the violence began, and Israel had resumed air strikes on Gaza after a patchy and limited seven-hour humanitarian truce ended on Monday, with one attack killing two people and wounding 16.

Both Hamas and Israel earlier confirmed the deal to Al Jazeera, with officials from each side pledging to commit to the truce and warning the other against violating it. “The deal is that we will have a 72-hour humanitarian ceasefire,” Osama Hamdan, a senior Hamas leader, told Al Jazeera, adding that he hoped Israel could “control itself”. “During those 72-hours there will be a delegation from Israel coming to Cairo. There will be indirect negotiations between Palestinian and Israeli sides for a ceasefire and the lift of a siege on Gaza and other Palestinian demands.” Mark Regev, a spokesman for the Israeli prime minister, Israel was ready to discuss all of the issues on the table, but that it still had concerns.

“Our goals in this operation have always been ultimately defensive,” Regev said. “If that goal of protecting our people from the rockets and the death squads can be done diplomatically, through this Egyptian agreement, then wonderful. We’ll be looking very closely to ensure that Hamas does in fact … live up to its obligations.”  Ban Ki-moon, UN secretary-general, urged “utmost restraint” after the truce was announced. Ban urged both sides to “commence, as soon as possible, talks in Cairo on a durable ceasefire and the underlying issues,” his office said hours after the announcement was made. “In this regard, he welcomes the proactive engagement of the Palestinian delegation under the leadership of President Abbas.” -aljazeera