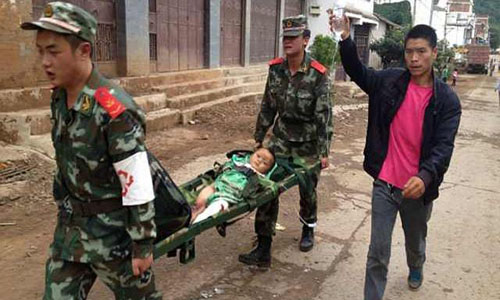 The death toll in southwestern China’s earthquake has risen to 589 as search and rescue teams push into isolated mountain communities to clear debris from collapsed homes. The Yunnan provincial government said that more than 2,400 people were injured in Sunday’s 6.1 magnitude quake in the mountainous farming region of Ludian county – the country’s deadliest tremor in four years.

“As of 10.30 on Wednesday 589 people have died,” China’s Civil Affairs Ministry said on its website Noexplanation was given for the sudden increase from a toll of 410 given on Tuesday, though rescuers have been pulling corpses from the wreckage.The ministry added that 2,401 people in Yunnan were injured by the quake, and 230,000 people had been evacuated, while more than 80,000 homes had fully or partially collapsed.At a makeshift headquarters in the forecourt of a cracked middle school in the worst-hit town of Longtoushan, a senior colonel in the People’s Liberation Army said there might still be hope to find survivors.”There are a lot of people that we may never be able to dig out,” senior Colonel Feng, a military officer based in Sichuan province and an unofficial spokesman, said.

“But there is still hope.”Wednesday’s big jump in the death toll – up from 410 on Tuesday – was due to rescuers arriving in places where they had previously been unable to contact anybody, in small farming villages built into the mountains above the main towns, Feng said.China called for volunteers to stay away from the disaster zone on Wednesday as traffic blocked supply routes and “substandard” relief goods flooded into the area.

Huge tailbacks have developed around the worst hit areas, mainly consisting of cars driven by members of the public bringing in supplies or offering help.Rescue efforts have also been hampered by landslides blocking roads.In Longtoushan, the quake’s epicentre, workers halted traffic as they set off explosions on the mountainsides to dislodge huge boulders perched precariously over roads.Thousands of troops and hundreds of volunteers have rushed to Ludian to dig out possible survivors from the debris, but landslides and bouts of heavy rains have complicated rescue efforts.

The quake struck an area of steep hills and narrow roads that are not well suited to all the traffic of the massive relief effort.Landslides have shorn shear rocky faces into valleys.The region is prone to earthquakes. In 1970, a magnitude-7.7 earthquake in Yunnan killed at least 15,000 people. In September 2012, a series of quakes killed 81 people.In May 2008, a powerful quake in Sichuan province left nearly 90,000 people dead.  -aljazeera