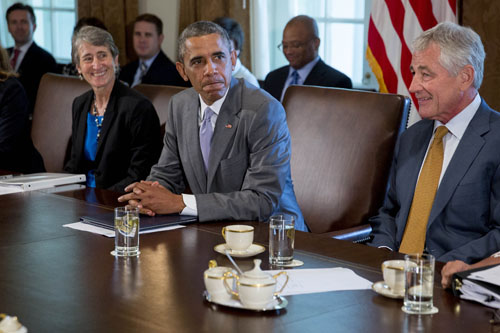 US President Barack Obama has authorised targeted air strikes against Sunni fighters in Iraq, saying the measure was meant to avert “genocide” in the country. “We can act, carefully and responsibly to prevent a potential act of genocide,” Obama said on Thursday, referring to the Yazidis, a religious minority group besieged by fighters from the so-called Islamic State.

“I therefore authorised targeted air strikes if necessary to help forces in Iraq as they fight to break the siege and protect the civilians trapped there,” he said. Obama did not, however, confirm or deny whether the US had already carried out air strikes in Iraq as claimed by a spokesman for the Kurdish peshmerga force. F-16s first entered Iraqi airspace on a reconnaissance mission and are now targeting Daash [Islamic State] in Gwer and in the Sinjar region,” Holgard Hekmat told the AFP news agency earlier. The Kurdish official said: “They just struck the bridge linking Mosul to Gwer. The bridge had been used by Daash to channel reinforcements and ammunition to Gwer.”

The president said US warplanes could also target Islamic State fighters if they advance on the city of Erbil, where the US has a diplomatic presence and advisors to Iraqi forces. A senior US defence official confirmed the mission had already dropped “critical meals and water for thousands of Iraqi citizens,” Yazidis trapped in the open on Mount Sinjar in northern Iraq. Republican Senators John McCain and Lindsey Graham praised Obama’s proposed actions on Thursday night but said much more will be necessary. “This should include the provision of military and other assistance to our Kurdish, Iraqi, and Syrian partners” who are fighting the militants, airstrikes against the militants’ leaders and forces and support for Sunni Iraqis who seek to resist the extremists,” they said in a statement.

Obama’s announcement came hours after the United Nations Security Council condemned the recent attacks by the Islamic State group in Iraq and called for international support for the country. “The members of the Security Council call on the international community to support the government and people of Iraq and to do all it can to help alleviate the suffering of the population affected by the current conflict in Iraq,” Britain’s UN Ambassador Mark Lyall Grant, president of the council for August, said after a meeting of the 15-member body on Thursday. Separately, French President Francois Hollande’s office said “France was available to support forces engaged in this battle.”

Several thousand Yazidis, members of an ancient pre-Muslim religious minority, are stranded on high ground after being driven out of their home town of Sinjar by Islamic State fighters. Fares Sinjari Abu Ivan, a Yazidi beekeeper who fled with his 80-year-old mother to the barren mountains, told AFP that some groups had attempted to flee but experienced mixed fortunes. “We have spoken to some who made it to Turkey but in their flight, they encountered Daash (Islamic State) fighters who cut the road. Some fled, some were killed and others came back to the mountain.” The Islamic State boasted of its latest victories, declaring: “We are pleased to announce to the Islamic nation a new liberation in Nineveh province, teaching the secular Kurds a lesson.” -aljazeera