US Police Clash with Ferguson Protesters 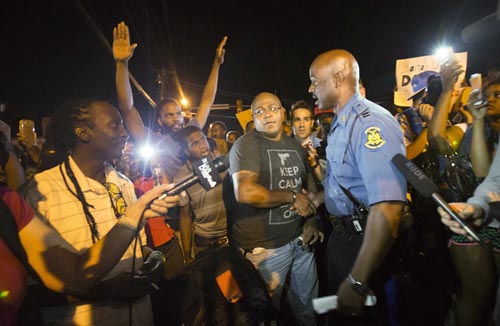 US police clash with Ferguson protesters

Police in the US state of Missouri have fired smoke canisters into a crowd of about 400 people protesting against the killing last week of an unarmed black teenager by police in the town of Ferguson. Barely hours ahead of a second night of curfew that was to come into effect at midnight.

police drove into the protest area in armoured vehicles and shot smoke canisters at watching media representatives during the protest that had until then appeared to be peaceful. However, the Missouri Highway Patrol said it was using the smoke canisters to disperse “aggressors” who were trying to infiltrate a law enforcement command post, and that the armoured vehicles were deployed to ensure public safety. Michael Brown’s fatal shooting by the police on August 9 while he was walking down the street unarmed in the St Louis suburb has led to days of protests and a heavy-handed police response.

Ferguson authorities say that Brown,18, was shot after an altercation with a police officer identified as Darren Wilson. Witnesses say the teenager was non-violent and compliant at the time of the shooting, and a victim of racism. The latest clashes came after the US attorney general ordered a federal autopsy on Brown.  The Justice Department said on Sunday that Eric Holder had requested the autopsy because of the “extraordinary circumstances” of the case and at the request of Brown’s family, who criticised a state examination as flawed. -aljazeera