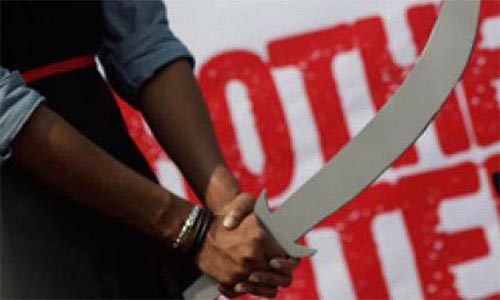 Four Saudi men have been beheaded by sword after being convicted of smuggling cannabis into the country, the interior ministry has said. The government-owned SPA news agency identified the Saudi men on Monday as two sets of brothers – Hadi and Awad al-Motleq, and Mufarraj and Ali al-Yami.

They were beheaded in the southwestern city of Najran were found to have smuggled “a large quantity of hashish” into the country. The government did not say when the executions took place. The beheadings raise to 32 the number of executions announced in Saudi Arabia so far this year, according to a tally by the AFP news agency. Rights watchdog Amnesty International denounced what it called a “disturbing surge” in executions in Saudi Arabia.

“The Saudi Arabian authorities must halt all executions,” the group said, adding that the executions of the two sets of brothers came “reportedly on the basis of forced confessions extracted through torture”. Amnesty’s statement said the latest executions “bring the number of state killings in Saudi Arabia in the past two weeks to 17 – a rate of more than one execution per day”. “The recent increase in executions in Saudi Arabia is a deeply disturbing deterioration. The authorities must act immediately to halt this cruel practice,” Amnesty’s Said Boumedouha said.

The group said it was contacted by relatives of the men on Thursday “asking for help amid fears that the executions were imminent”, and that later the family was told by the interior ministry to stop contacting the rights watchdog. Last year, there were 78 executions in Saudi Arabia and the UN High Commissioner for Human Rights denounced a “sharp increase in the use of capital punishment”. Rape, murder, apostasy, armed robbery and drug trafficking are all punishable by death under the kingdom’s strict interpretation of Islamic teachings. -aljazeera