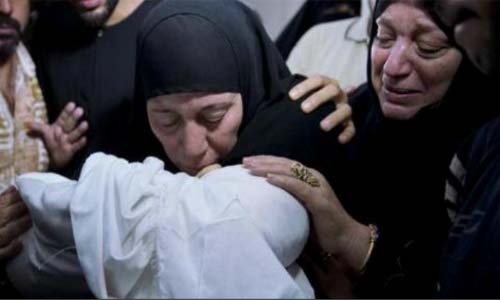 Several thousand mourners have joined the funeral procession for the wife and baby son of Hamas’ military commander Mohammed Deif. Addressing the mourners, a young man passed on the condolences of the al-Qassam Brigades, the armed wing of Hamas, and prayers were read for two other men who died earlier on Wednesday when a rocket hit their motorcycle in the northern town of Beit Lahiya.

The airstrikes on Tuesday killed Deif’s wife and his seven-month-old son at the house of a family they were staying with. Jane Ferguson, reporting from Gaza, said: “Locals here say it was struck by Israeli airstrikes at least five times on Tuesday night.” Hamas said Israel had targeted Deif in the airstrikes, but had failed to kill him. The group also said Israel had attempted to kill Deif on three previous occasions.

Speaking on Wednesday, Israel’s interior minister Gideon Saar said Deif was a legitimate target. “Mohamed Deif deserves to die just like [Osama] bin Laden,” he said. “He is an arch murderer and as long as we have an opportunity we will try to kill him.”  At a news conference in Tel Aviv, Benjamin Netanyahu, Israel’s prime minister, said: “Commanders of Hamas’ military wing are legitimate targets.”

‘Pay for its crimes’

A Hamas spokesman known as Abu Obaida called on Wednesday for Palestinian negotiators to withdraw from talks in Cairo after the deaths.  However, Moussa Abu Marzouk, head of the Hamas delegation in the Egyptian capital, told they would not yet be withdrawing, and were waiting to hear back from the Egyptians. Abu Obaida also warned international airlines against flying into or departing from Israel’s Ben Gurion airport starting at 3:00 GMT on Thursday.

“The occupation will pay for its crimes against Palestinian civilians and those living around the Gaza border will not return home until Mohammed Deif decides,” Hamas spokesman Sami Abu Zuhri said in a statement.  Shelling on Wednesday killed 21 Palestinians, raising the death toll in Gaza to 2,035.

On Tuesday, a week-long truce in Gaza collapsed with both sides blaming each other after Palestinian fighters launched rockets into Israel and Israel attacked “terror sites” inside the besieged enclave. Ferguson said at least six children had been killed in the airstrikes since the truce disintegrated. “There is now this fallout row, essentially over who started it,” she said.  “Whoever broke the truce, it seems the exchange of rocket fire into Israel and airstrikes on Gaza is unlikely to end today.”

The Israeli military launched attacks on at least 10 sites in Gaza on Tuesday, killing at least three people, and recalled its team working on a permanent ceasefire with Palestinians in Cairo after three rockets landed in Israel.  An Israeli government official said: “In response to Hamas’s violation of the truce, the prime minister and defence minister have ordered the IDF [Israeli army] to once more attack terror sites in the Gaza Strip.” The al-Qassam Brigades said on Twitter that it had fired rockets towards Tel Aviv. No one was injured in the attack on the city, the Israeli army said. -aljazeera