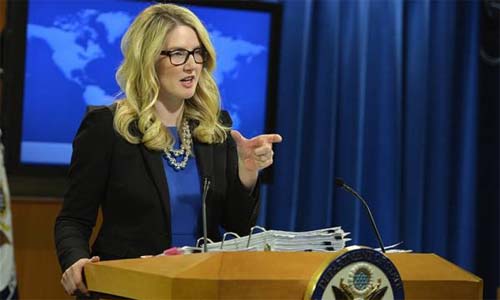 Saying that it was zoomed in on the political crisis in the South Asian country, United States Thursday denied having any role whatsoever in the mediation between Pakistan’s beleaguered government and the political parties staging mass protests in a bid to dislodge Prime Minister Nawaz Sharif.

“We’re monitoring the demonstrations. Obviously, we think there should be a space in Pakistan for peaceful expression of views. So it’s something we’re looking at”, State Department spokeswoman Marie Harf told reporters during a daily media briefing. She said the US was in no way involved in the process or the discussions between the rival parties. “Any suggestion to the contrary is completely false.

So we’re watching it, but we do think that there needs to be peaceful dialogue and no attempts to change Pakistan’s government through extra-constitutional maneuvers”, Hard said further. Harf stressed the US believed in the fact that Nawaz Sharif was the elected prime minister of Pakistan at the moment. “Sharif is who we will keep working with as we will with a number of people in Pakistan as well”, the spokeswoman added To a question whether there were any contacts between Islamabad and Washington about this current situation, Harf said Ambassador Olson was in touch with a range of Pakistani officials, adding that’s where the contact had occurred.