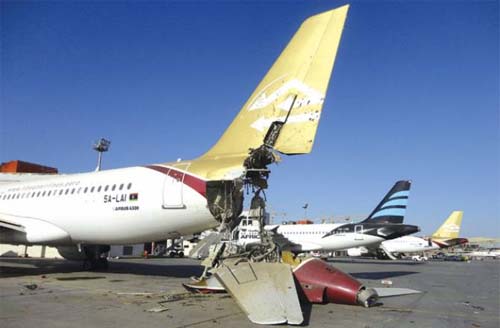 Libya wants the international community to help protect its oilfields, airports and other state assets as it is too weak to stop armed groups fighting for control, its ambassador in Cairo said on Monday. The plea came as attackers fired Grad rockets at Labraq airport in eastern Libya.

Targeting one of the country’s few functioning air hubs as violence between armed factions escalates three years after the ouster of Muammar Gaddafi. Western powers and Libya’s neighbours fear the OPEC producer will become a failed state or slide into civil war after former rebels who helped topple strongman Gaddafi in 2011 have turned their guns on each other. Rival factions have turned the capital Tripoli and the main eastern city Benghazi into battlegrounds, forcing the United Nations and embassies to evacuate their staff and citizens. Senior officials and a freshly-elected parliament have relocated to Tobruk in the far east to escape the violence.

“There are forms of international intervention (possible) particularly since Libya is unable to protect its institutions, its airports and natural resources, especially the oilfields,” Ambassador Mohamed Jibril said on the sidelines of a meeting of Libya’s neigh bours in Cairo. Egyptian Foreign Minister Sameh Shukri told the meeting Libya needed a ceasefire of all armed factions and a national dialogue to overcome its deep divisions. The appeal for foreign aid came as unknown attackers used a Grad multiple rocket launcher to attack Labraq airport, its director Abu Bakr al-Abidi said. The airport was still operating. Labraq, east of Benghazi, has become a major gateway into Libya since Egypt and Tunisia canceled almost all flights to the capital Tripoli and the west of the country last week, citing security reasons.

Tunis Air suspended flights to Labraq and Tobruk in the far east on Sunday, Libyan officials said. It was one of the last foreign airlines still flying to Libya after rival factions turned Tripoli International Airport into a battlefield last month. Benghazi’s own airport has been closed since May when a renegade general launched a military campaign on Islamists in the port city. Tripoli was quiet on Monday after an armed faction mainly from Misrata in western Libya seized its airport from a rival western group from Zintan on Saturday. The terminal has been destroyed by fire though it is unclear who was responsible. -nation