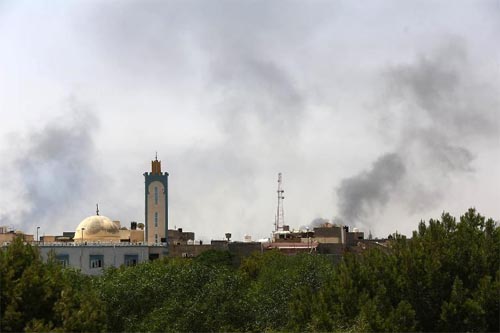 Egypt has denied any role in air attacks in Libya, as the US said it believed Cairo worked with the UAE to attack rebels in the capital Tripoli. The US government on Tuesday said it believed the UAE and Egypt carried out raids in Libya, a day after the New York Times quoted unnamed officials as saying the same.

Egypt’s foreign minister Sameh Shoukry said his country was not involved “in any military activity and it does not have any military presence on Libyan territories”. “We respect the Libyan people’s will represented by the parliament and all its decisions.” An Emirati official told the AFP news agency on Tuesday that his country had “no reaction” to such reports. Separately, the US, France, Germany, Italy and the UK gave warning against “outside interference” in Libya, saying it “exacerbates current divisions and undermines Libya’s democratic transition”.

“France, Germany, Italy, the UK and the US strongly condemn the escalation of fighting and violence in and around Tripoli, Benghazi, and across Libya, … by both land attacks and air strikes.” Bernardino Leon, the newly appointed UN envoy to Libya, said that he opposed foreign intervention as a strategy to halt the crisis in the country.  But the Spaniard added that Libya needs international support to back “Libyans who want to fight chaos … through a political proces”. The air raids in Tripoli may have been a bid to prevent the capture of the Tripoli airport, but fighters later seized control. Former Libyan leader Muammar Gaddafi was overthrown in 2011 by rebels backed by US, French and British air power. -aljazeera