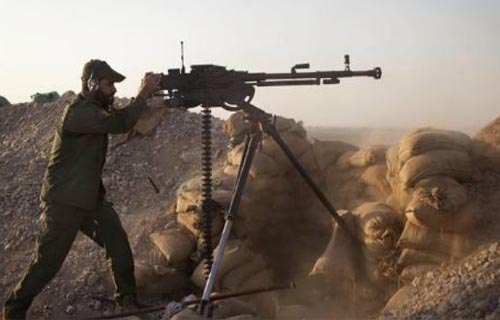 Government forces mainly composed of Kurdish peshmerga fighters and armed volunteers have broken through the Islamic State group siege on the town of Amerli located between Baghdad, and the northern city of Kirkuk. Iraqi forces and the armed volunteers entered the city on Sunday, where at leat 12,000 people have been trapped for over two months with dwindling food and water.

“Our forces entered Amerli and broke the siege,” security spokesman Lieutenant General Qassem Atta told the AFP news agency. Adel al-Bayati, mayor of Amerli, also confirmed the report to Reuters news agency saying that government forces are now “inside” the town, adding that it “will definitely relieve the suffering of residents.” Al Jazeera’s Sue Turton, reporting from Tuz Kharmatu near Amerli, said that fighting continues in the south and north of the town as government forces try to drive out the armed Sunni fighters.

Our correspondent also said that there have been unconfirmed reports that Iranian jets were also involved in bombing the Islamic State group. Reporting from the capital Baghdad, said that the government forces were also backed by “Shia militia”.  On Saturday, the US military attacked Islamic State positions and airdropped humanitarian aid to the trapped civilians, mostly Shia Turkmen minority. Reports on Sunday said more aid was dropped from British, French and Australian planes. “I can see the tanks of the Iraqi army patrolling Amerli’s street now. I’m very happy we got rid of the Islamic State terrorists who were threatening to slaughter us,” Amir Ismael, an Amerli resident, to Reuters by phone.