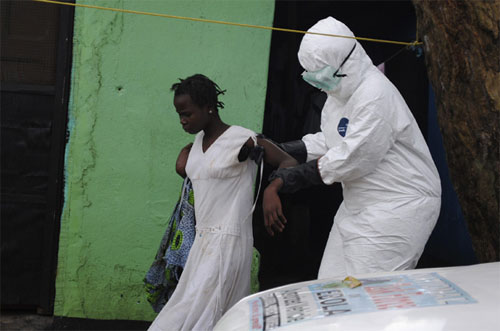 US President Barack Obama has said the US is prepared to take leadership in tackling Ebola, warning that the epidemic in West Africa is “spiralling out of control”. Obama urged a global expanded effort to fight the deadly disease, as he unveiled a new $500m US initiative that will see 3,000 military personnel posted to the region to combat the health crisis.

In addition to the troop deployment, the heightened US role in West Africa will include erecting new treatment and isolation facilities, training healthcare workers and boosting communications and transportation support. “In West Africa, Ebola is now an epidemic, the likes that we have not seen before. It’s spiralling out of control, it’s getting worse,” Obama said after meeting top US public health officials. Obama, who has called the epidemic a national security crisis, has faced criticism for not doing more to check the outbreak, which the World Health Organisation said last week had killed more than 2,400 people out of 4,784 cases in West Africa.

US officials said a military control centre for coordination would be established in Monrovia, capital of Liberia, to coordinate efforts with the US government and other international partners. The US plan also focuses on training. A site will be established where military medical personnel will teach about 500 healthcare workers per week for six months or more how to provide care to Ebola patients, officials said. The WHO estimates that the hardest-hit countries – Guinea, Liberia and Sierra Leone – need at least three to four times the number of medical and public-health workers currently on the ground, or another 600 doctors to care for patients and 1,000 workers to track their contacts.

Earlier on Tuesday, the UN chief said the world body is “taking the lead now” on international efforts to fight the Ebola outbreak. “This has gone beyond health issues,” Secretary-General Ban Ki-moon said, adding that the outbreak has social and economic dimensions and could even affect regional stability. He also said the UN General Assembly next week will follow up with a high-level meeting. The number of Ebola cases could start doubling every three weeks in West Africa, the World Health Organisation said, warning that the outbreak will cost nearly $1bn to contain so it does not turn into a “human catastrophe”. -aljazeera