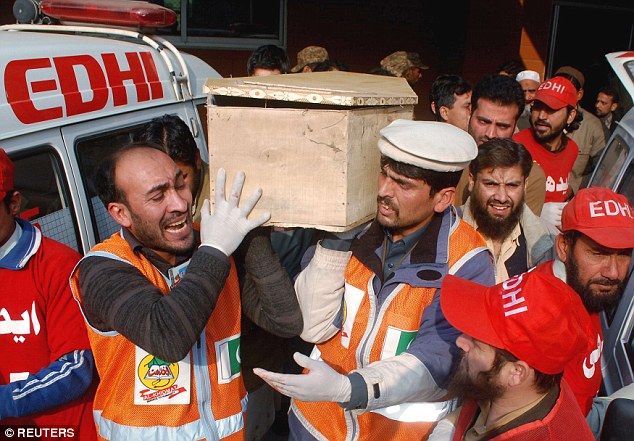 ISLAMABAD: Russian President Vladimir Putin has strongly condemned the attack on schoolchildren in Peshawar and has extended his condolences to the bereaved families.In his letter to President Mamnoon Hussain and Prime Minister Nawaz Sharif, released by the Russian Embassy here on Wednesday, the Russian president said, “I was deeply shocked by the barbaric terrorist attack on the school in the city of Peshawar that led to numerous victims among innocent citizens – the majority of which were children and teenagers.

“We strongly condemn this heinous attack of the militants. We support efforts of the Pakistani authorities aimed at countering the menace of terrorism. “I request you to kindly convey my sincere condolences to the families of those killed and wishes of speedy recovery to all affected.”

People of the Turkey on Wednesday observed one-day mourning for victims of Peshawar massacre as Turkish President Recep Tayyip Erdogan called up Prime Minister Nawaz Sharif and condemned the brutal act of terror in a Peshawar school killing. Showing his solidarity with Pakistani nation, the Turkish president conveyed his condolences to the families of innocent kids and people. Turkish Prime Minister Ahmet Davutoglu also called Prime Minister Nawaz Sharif and expressed sympathy, grief and solidarity with the people of Pakistan. He said that he has just announced one-day mourning in Turkey on this tragic incident. Flags flew at half mast across Turkey on Wednesday in mourning for those killed in a Taliban attack at a school in Peshawar. Meantime, Afghan President Ashraf Ghani and Chief Executive Abdullah Abdullah also phoned premier Sharif and voiced their sorrow over the tragedy, saying, “Afghan people stand by Pakistan on this national tragedy as this is a mourning day for the people of Afghanistan too.” Sharif thanked the leaders of brother countries and said Pakistan stands firm to eradicate terrorism from its soil and that all possible efforts will be maintained to bring stability in the region.

Adviser on Foreign Policy and Security to German Chancellor, Dr Christoph Heusgen phoned Special Assistant to Prime Minister on Foreign Affairs, Syed Tariq Fatemi on Wednesday. He conveyed the deepest condolences of German government on the carnage at a school in Peshawar, as well as assurances of support and solidarity with the people of Pakistan at this hour of grief, said the Foreign Office spokesperson. Tariq Fatemi thanked him on the expression of solidarity which was reflective of the close ties between Pakistan and Germany.He stressed that this heinous crime against innocent children, had further strengthened the nation’s resolve to fight extremism and terrorism. agencies

Hand Over Fazlullah – Warning to Afghan Authorities by General Raheel