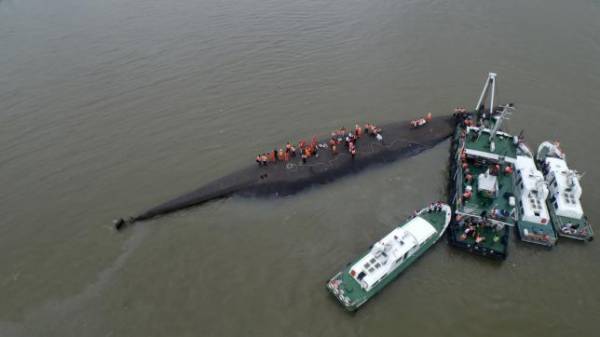 The death toll from a ship that capsized on China’s Yangtze River has risen to 65, state television reported on Thursday, but more than 370 people were still missing as angry families gathered at the disaster site to demand answers.

Another 39 bodies were recovered overnight, CCTV said on its microblog. Only 14 survivors, including the captain, have been found since the ship carrying 456 people capsized in a freak tornado on Monday night, in what could be China’s worst shipping disaster in almost 70 years.

However, rescuers are not giving up their search of the ship, which was carrying many elderly Chinese tourists, despite the fading hopes of relatives. They have begun cutting small holes through the Eastern Star’s upturned hull to get better access, although no new survivors have been found, state media reported.  “The ship sank in a very short time frame, so there could still be air trapped in the hull,” Li Qixiu of the Naval University of Engineering told Xinhua. “That means there could still be survivors.” More family members, frustrated by the lack of information coming from authorities, began arriving. Dozens took a bus from Nanjing to Jianli County in Hubei, where the ship sank.

Some broke through a cordon of 20-25 paramilitary police, who had tried to stop them at a roadblock, as they marched to reach the river bank early on Thursday. “Right now the government has an attitude of complete apathy towards us,” said Cao Feng, 40, whose parents were on board. “We just want to be closer to our relatives.”  June 4 marks the anniversary of the 1989 crackdown on pro-democracy demonstrators around Beijing’s Tiananmen Square, and any sort of protest is strongly discouraged by China’s stability-obsessed leaders.

There was also a heavy security presence outside one the hotels where some of the family members are staying. The ship had been on an 11-day voyage upstream from Nanjing, near Shanghai, to Chongqing. Volunteers from Jianli offered rides and water to the distraught family members on the march, and some people tied yellow ribbons to their car mirrors. Some relatives have asked the government to release the names of survivors and the dead, while others questioned why most of those rescued were crew members, why the boat did not dock in the storm, and why the rescued captain and crew members had time to put on life vests but did not sound any alarm.

The search area has been extended up to 220 km (135 miles) downstream, suggesting that bodies could have been swept far from where the ship foundered. Police have detained the captain and chief engineer for questioning. An initial investigation found the ship was not overloaded and had enough life vests on board.State media said it was the worst recorded ship disaster on the Yangtze River. In 1948, the steamship Kiangya blew up on the Huangpu River, killing more than 1,000 people. – Reuters