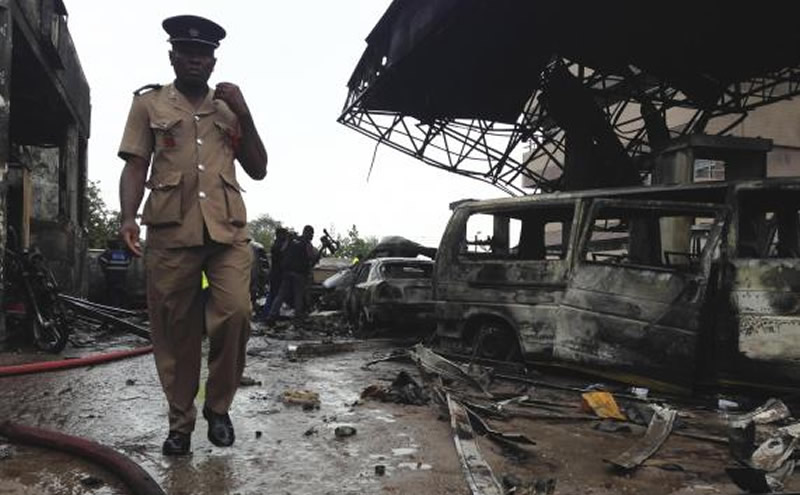 An explosion at a petrol station in Ghana’s capital and flooding caused by torrential rains killed around 150 people, President John Mahama said on Thursday, marking the worst disaster to strike the West African country in more than a decade.

Around 96 people who sought shelter from floods overnight at the state-owned GOIL gas station near a busy downtown intersection were killed, authorities said.

Thousands more were made homeless in the citywide flooding, officials said. The incidents expose the weakness of Accra’s infrastructure which has failed to keep pace with population growth after years of rapid economic expansion. It is vulnerable to storms that wreak havoc as poor drainage leads to flooding. Witnesses said low-wage workers struggling home through the seasonal storm with roads closed and minivan buses not running were victims of the blast, the force of which gave few a chance to escape.  “It was an explosive fire and so the people sheltering at the filling station did not have an opportunity to escape,” fire brigade spokesman Prince Billy Anaglate told reporters. People were burned beyond recognition where they stood under the station’s awning, or trapped and incinerated in the wreckage of cars and minivans on the station’s forecourt. A fuel leak at the station caused the accident that also destroyed nearby buildings, Mahama said, announcing three days of national mourning would begin on Monday as well as the creation of a 50 million cedis ($12 million) recovery fund.

It was Ghana’s single worst disaster since more than 120 people died in May 2001 in a stampede at the national stadium during a football match, a police spokesman said. One woman said she sought refuge at the station from floods that prevented her returning home from work, but quickly became alarmed by an overpowering smell of gasoline and moved to stand next to an adjacent bank building. A power cut plunged the area into darkness and when a generator was switched on at the gas station to provide light people at first cheered, said Comfort Arhin, a domestic worker. “We heard a pop. Then the fire was walking where the petrol was. Everybody was running. You had to fight for yourself. My bag fell inside the water … All the people in the filling station died,” she told Reuters. Her testimony suggests Ghana’s chronic power shortages, which have hurt businesses and angered voters, may also have been one cause of the accident.

Ghana is one of Africa’s most stable democracies and for years its exports of gold, cocoa and oil made it one of the continent’s fastest-growing economies. But since 2013, it has wrestled with lower world commodity prices as well as a fiscal crisis, with growth this year projected to fall to below the average for sub-Saharan Africa. Ghana’s emergency services doused the flames and secured the area, pegging back anxious crowds. Rescue workers wearing face masks retrieved bodies and piled them onto a truck. Mahama said he was heartbroken by the loss of life and blamed the floods partly on people building homes and businesses on the city’s waterways, blocking drainage systems. “This loss of life is catastrophic and almost unprecedented,” Mahama said as he visited the scene. “We must sit down and strategise to make sure this doesn’t happen again.” Opposition leader Nana Akufo Addo also visited the site and called it a “dark day in the history of the city”. –Reuters