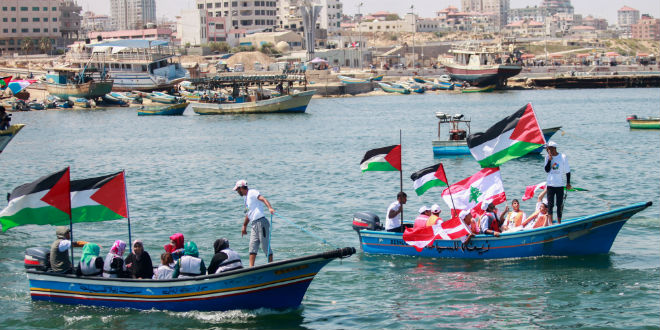 Israeli naval forces boarded and took over an activist vessel seeking to break the Gaza blockade, and were escorting it to an Israeli port early Monday,

The military said, saying that the navy did not use force. “In accordance with international law, the Israeli Navy advised the vessel several times to change course,” it said in a statement.

“Following their refusal the Navy visited and searched the vessel in international waters in order to prevent their intended breach of the maritime blockade of the Gaza Strip.” “The forces have reported that use of force was unnecessary, and that the process was uneventful,” it added. “The vessel is currently being escorted to Ashdod Port and is expected to arrive within 12-24 hours.”

A military spokeswoman confirmed to AFP that the vessel was the Swedish-flagged Marianne of Gothenburg, part of the so-called Freedom Flotilla III — a convoy of four ships carrying pro-Palestinian activists including Arab-Israeli lawmaker Basel Ghattas, Tunisia’s former president Moncef Marzouki and at least one European lawmaker. There was no immediate word on the other three ships, which a reporter on the Marianne had said on Sunday were sailing some way behind it. – AFP

China’s New Silk Road: What’s in it for Gilgit-Baltistan?

China’s New Silk Road: What’s in it for Gilgit-Baltistan?