UK-India Trade Deals Announced as Modi Speaks Out on EU 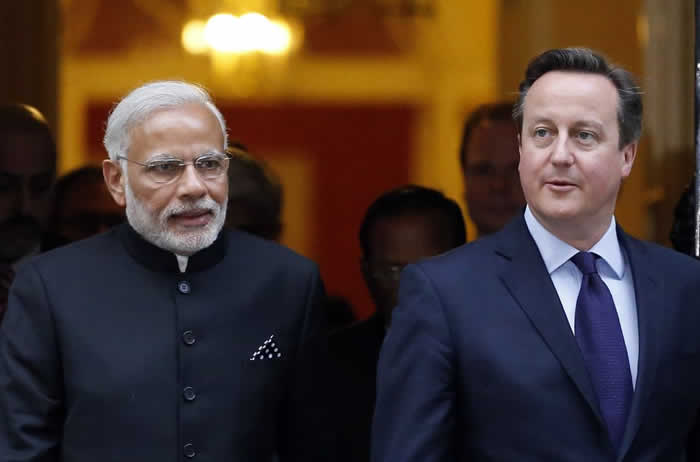 Trade deals worth £9 billion (12.7 billion euros, $13.7 billion) will be announced during Indian Prime Minister Narendra Modi’s visit to Britain, David Cameron said Thursday, as Modi indicated he wanted the UK to stay in the EU.

London is rolling out the red carpet for Modi on his three-day visit to Britain, the first by an Indian prime minister in nearly 10 years. He will meet Queen Elizabeth II on Friday and address a huge rally at Wembley Stadium.

After talks with Cameron, Modi became the first Indian premier to address Britain’s parliament and was feted with a flypast by the Red Arrows aerobatics team, which trailed smoke over London in the colours of India’s flag. Cameron announced the trade deals at a press conference and also revealed that £1.0 billion of rupee-denominated bonds would be traded in London.

“We want to forge a more ambitious, modern partnership, harnessing our strengths and working together for the long term to help shape our fortunes at home and abroad in the 21st century,” he said. The deals are expected to include India buying more BAE Systems Hawk trainer jets — the same plane used by the Red Arrows — for its armed forces. But when Modi was asked whether Britain should remain in the EU, in a referendum called by Cameron and being held by the end of 2017, Modi said: “As far as India is concerned, if there is an entry point to the European Union, that is the UK”. Up to 500 people held a demonstration outside Downing Street against the visit before the talks with Cameron, many of them Sikhs. Modi was elected by a landslide in 2014 but he and his Hindu nationalist Bharatiya Janata Party (BJP) have faced accusations from opponents that they are failing to protect minorities.

He was effectively banned from Britain until three years ago over anti-Muslim riots which killed more than 1,000 people in 2002, when he was chief minister of Gujarat state. He has always denied any responsibility. Nirmala Rajasingam, one of the protest organisers, said: “We have been protesting against the Modi government for a very long time because the matters of the Gujarat atrocities have not been settled yet.” Meanwhile, roughly 200 literary figures, including Mumbai-born British author Salman Rushdie, signed an open letter warning of a “rising climate of fear” in India.