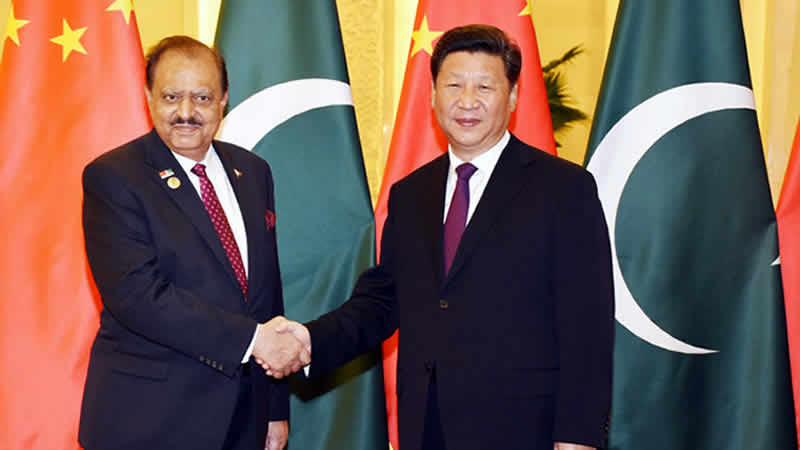 President Mamnoon Hussain and President Xi Jinping of China on Wednesday reiterated their resolve to further bolster the all-weather and multi-faceted strategic partnership and ties that exist between Pakistan and China in all areas of mutual interest.

The two leaders, who met here on the sidelines of the 2nd World Internet Conference, besides discussing the bilateral relations also exchanged views on the situation prevailing in the region.

President Mamnoon Hussain said that since 2015 was being celebrated as the “Year of Friendship” by Pakistan and China with the next year to be 65th anniversary of the establishment of diplomatic relations, the two sides should take this opportunity to further promote people to people contacts. He expressed satisfaction over the progress on China-Pakistan Economic Corridor (CPEC) projects and hoped that the projects under CPEC would be implemented in a timely and efficient manner. The President apprised his Chinese counterpart that many Central Asian states were keen in developing linkages with CPEC to utilize the immense economic and trade potential after the completion of this project. The President hailed China’s support for Pakistan’s admission as a full member of Shanghai Cooperation Organization (SCO) and said Pakistan looked forward to become SCO’s full member in the near future. He also informed the Chinese President about the successes achieved by Pakistan in the on-going military operation Zarb-e-Azb in the Federally Administered Tribal Areas (FATA) and the implementation of Counter-Terrorism Action Plan elsewhere in the country.

The President said that Pakistan was committed to combat terrorism and elimination from the region. The President informed his Chinese counterpart that Pakistan was raising a special force for the security of Chinese working on CPEC projects. He also expressed satisfaction over the Pak-China defense cooperation that has expanded at a satisfactory pace in recent years. The President informed President Xi about the successful hosting of the Heart of Asia Ministerial Conference by Pakistan last week in Islamabad, where President Ashraf Ghani represented Afghanistan. Both Pakistan and China will continue to support the Afghan-owned and Afghan-led reconciliation process. The President also informed President Xi that Indian Foreign Minister Sushma Swaraj represented India in the Heart of Asia Ministerial Conference. He shared with the Chinese President that Pakistan and India have agreed to resume the Comprehensive Bilateral Dialogue process, which was a welcome development. The President welcomed China’s initiative on organizing the 2nd World Internet Conference and Pakistan realized the importance of cyber-security. President Xi Jinping while terming Pakistan and China as iron friends said that the strategic relations between the two countries are a driving force for attaining progress and prosperity. He expressed satisfaction over the substantive progress in CPEC projects and called for timely completion of the early harvest projects for the benefit of people. The Chinese President extended his support for Pakistan’s Counter Terrorism Policy (CTP) and appreciated its successes in the efforts for elimination of terrorism.

He underscored the need to celebrate the 65 years of Pak-China diplomatic relations by devising plans for increased people to people contacts and exchange of delegations in the areas of culture, education and youth. President Xi congratulated Pakistan on the successful holding of the Heart of Asia Conference and expressed his happiness over the outcome. He hoped that Pakistan’s efforts will lead to peace in the region. The Chinese President appreciated Pakistan’s policy for good relations with its neighbours. – APP

War with Pakistan not an option: Indian FM