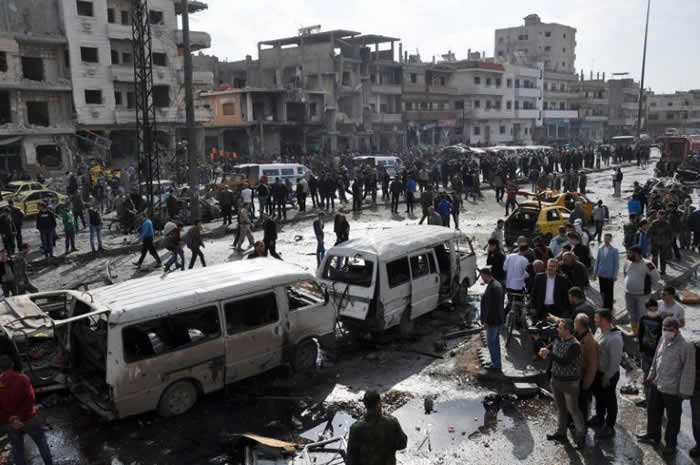 Bombings kill at least 87 in Syria as Kerry pushes ceasefire

Bomb attacks in Syria’s central city of Homs and near a shrine outside Damascus killed at least 87 people on Sunday, as Washington pursued efforts for a ceasefire. United States (US) Secretary of State John Kerry said a provisional deal had been reached on the terms of a truce, as violence intensified on the ground.

Later at least 30 people were killed in a series of attacks, including a car bombing, near the shrine of Sayyida Zainab south of the capital, state television and the monitor said. The Homs attack was the worst in the city since twin bombings hit a school in October 2014, killing at least 55 people including 49 children. Al-Zahraa ─ whose residents are mostly from the same Alawite sect as Syria’s ruling clan ─ has been regularly targeted by attacks, including last month when a double bombing claimed by the militant Islamic State (IS) group killed 22 people. State television footage from the scene showed emergency workers carrying a charred body on a stretcher past shops shorn of their fronts and mangled cars and minibuses.

IS claimed responsibility for the attack, saying in an online statement that two its members had driven explosives-laden cars into crowds of residents. The blasts outside Damascus saw a car bombing and two suicide attacks rip through the area of the Sayyida Zainab shrine, killing 30 people and wounding dozens more, state television reported. The Observatory gave a slightly higher death toll of 31 killed and said there were four attacks. World powers have been pushing for a halt in fighting in Syria that was meant to take effect by Friday, but have struggled to agree on how it should be implemented.

The latest bombings came as Kerry said he had spoken with Russian counterpart Sergei Lavrov and agreed on how to implement a ceasefire. “We have reached a provisional agreement, in principle, on the terms of the cessation of hostilities that could begin in the coming days,” Kerry said in Amman. “It is not yet done and I anticipate that our presidents, President (Barack) Obama and President (Vladimir) Putin, may well speak somewhere in the next days or so in order to try to complete this task,” he added. World powers proposed the truce just over a week ago as part of a plan that also included expanded humanitarian access, in a bid to pave the way for the resumption of peace talks.

The talks, which collapsed earlier this month in Geneva, were scheduled to resume on February 25, but the United Nation’s envoy on Syria has already acknowledged that date is no longer realistic. On Saturday, a key opposition umbrella group, the High Negotiations Committee, said it would agree a temporary truce only if regime backers halted fire. HNC chief Riad Hijab said any ceasefire must be reached “with international mediation and with guarantees obliging Russia, Iran and their sectarian militias and mercenaries to stop fighting”. Assad meanwhile told Spain’s El Pais newspaper that he was “ready” for a ceasefire, but said it should not be exploited by “terrorists”.