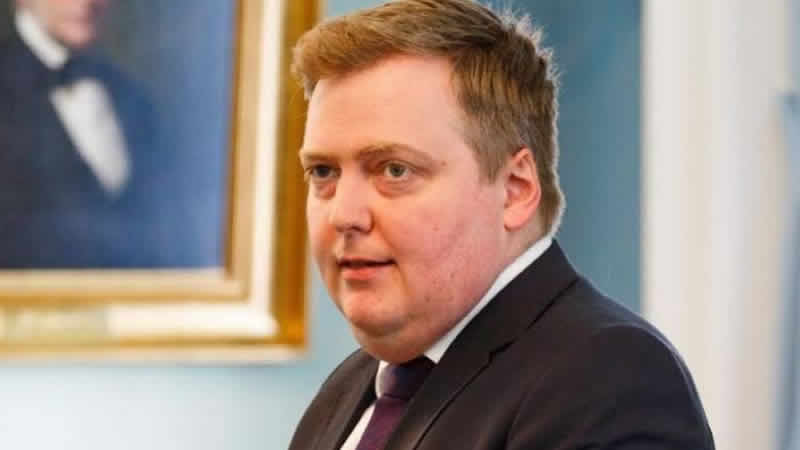 Prime Minister Sigmundur David Gunnlaugsson was the biggest casualty of a worldwide media probe into 11.5 million leaked documents that purportedly reveal the offshore financial activities of 140 political figures, including 12 current or former heads of state.

“The prime minister told (his party’s) parliamentary group meeting that he would step down as prime minister and I will take over,” the Progressive Party’s deputy leader Sigurdur Ingi Johannsson told a live broadcast. A series of other leaders and stars fingered in the leaked papers have hit back at the allegations, denying any wrongdoing despite the international furore. Iceland’s leader had been under immense pressure after the papers, leaked from a Panamanian law firm, appeared to show that he and his wife Anna Sigurlaug Palsdottir owned an offshore company in the British Virgin Islands and placed millions of dollars there.

Though the prime minister denied ever hiding money abroad, pressure on his government had mounted, with egg-throwing protesters gathering in the streets Monday and fresh demonstrations planned Tuesday. The vast stash of records from Panamanian legal firm Mossack Fonseca was obtained from an anonymous source by German daily Sueddeutsche Zeitung and shared with more than 100 media groups by the International Consortium of Investigative Journalists (ICIJ). The network of journalists published their first findings Sunday after a year-long probe.

Read More: 10 Best Travel Destinations For Children Around the World

Offshore financial dealings are not illegal in themselves, though they may be used to hide assets from tax authorities, launder the proceeds of criminal activities or conceal misappropriated or politically inconvenient wealth. In Beijing, there was no official reaction to ICIJ allegations that eight current or former members of the ruling party’s most powerful body concealed their fortunes through offshore havens, as well as relatives of Xi Jinping, who has overseen a much-publicised anti-corruption drive. Asked whether China would investigate those named in the reports, however, foreign ministry spokesman Hong Lei said: “For such groundless accusations, I have no comment.”

The Kremlin suggested a US plot after the leaks put a close friend of Putin’s at the top of an offshore empire worth more than $2 billion. “Putin, Russia, our country, our stability and the upcoming elections are the main target, specifically to destabilise the situation,” said a Kremlin spokesman, claiming many of the journalists were former officers from the US state department, the CIA and special services. Messi’s family denied any wrongdoing after the footballer and his father were named as owners of a Panama company that had not previously been disclosed during a Spanish probe into their tax affairs. “The Panama company to which they refer to is a totally inactive company that never had any funds or any open current accounts,” the Messi family said in a statement Monday. Australia, France and the Netherlands have announced investigations into revelations contained in the papers.

A judicial source said Spain had opened a money-laundering probe into the law firm. “We need to make sure that not just ordinary citizens pay their taxes but also people who have a lot of money, who earn a lot of money, pay their taxes where they make that money and don’t hide the money,” visiting European Commission Vice President Frans Timmermans told reporters Tuesday in the Polish capital Warsaw. Panama has pledged to identify whether any crimes had been committed and any financial damages should be awarded. But France’s Finance Minister Michel Sapin said his country would put Panama back on its list of countries that do not cooperate in efforts to track down tax dodgers following the revelations.

Among the latest allegations of the Panama Papers investigations: A North Korean front company used to help fund the country’s nuclear weapons programme, Pyongyang-based DCB Finance Ltd, was among Mossack Fonseca’s clients, according to the BBC and The Guardian. Prime Minister David Cameron’s father ran an offshore fund that paid no tax in Britain for 30 years, according to the Panama Papers probe. Cameron’s Downing Street office insisted it was a “private matter” although a government source later told AFP that the prime minister himself did not have any such funds. Aides to French far-right leader Marine Le Pen put in place a “sophisticated offshore system” to hide money, according to Le Monde newspaper.

Syria used Mossack Fonseca to create shell companies to help it break international sanctions and fund its war effort, the French paper said. The papers, from around 214,000 offshore entities covering almost 40 years, also name the president of Ukraine and the king of Saudi Arabia. Ukrainian President Petro Poroshenko denied any wrongdoing, but he may face an attempt to impeach him. One of the Panama law firm’s founders, Ramon Fonseca, told AFP the leaks themselves were “a crime, a felony” and “an attack on Panama”. Mossack Fonseca is subject to investigations in Germany and also in Brazil, where it is part of a huge money laundering probe that has threatened to topple the current government.