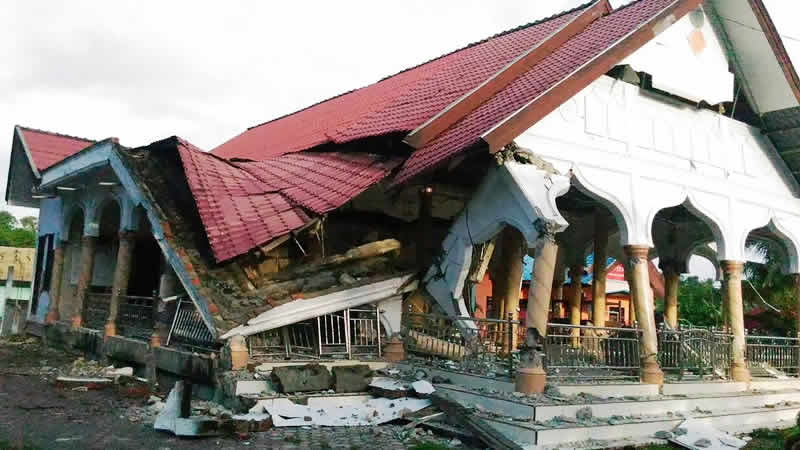 At least 25 people died and hundreds were injured after a strong earthquake struck off Aceh province on Indonesia’s Sumatra island on Wednesday, local officials said.

The shallow 6.5-magnitude quake struck Pidie Jaya district at dawn, as some in the predominantly Muslim region prepared for morning prayers.

Mosques and shops were flattened in the small town of Meureudu, where the force of the quake sent people fleeing from their homes. No tsunami alert was issued. The head of the local disaster agency, Puteh Manaf, said the sole hospital in the district had been overwhelmed by the number of injured. “The data we have now is that 25 people have been killed and hundreds are estimated to have suffered injuries,” he told AFP. Local district secretary Iskandar Ali also confirmed the figure, citing preliminary data that showed at least 25 had died in the quake. Rescue operations were under way to find those believed trapped beneath the rubble, with heavy machinery being used to shift the debris.

A witness said local residents were wandering the streets, unable to return to their damaged homes and fearing aftershocks. Images from the scene showed homes levelled, mosque spires toppled and cars crushed under rubble. Meureudu resident Hasbi Jaya, 37, said his family was asleep when the powerful quake struck. We immediately ran outside the house but it crumbled. Everything from the roof to the floor collapsed, and was destroyed,” he told AFP. I looked around and all my neighbours’ houses were also completely destroyed.” The local hospital was struggling to cope, with the injured being treated on the ground outside the front of the building. Patients were also being sent to a neighbouring district with greater facilities, said deputy district chief Said Mulyadi. He said at least seven children were among the dead, and many more had suffered broken bones and other injuries.

There are many shophouses have caved in, and many (people) are alive but trapped,” he told AFP. Seismologists said the earthquake was felt across much of Aceh province, which was devastated by the 2004 Indian Ocean tsunami. At least five aftershocks followed the quake, said Eridawati, local head of the Meteorology, Climatology and Geophysics Agency. The US Geological Survey upgraded the magnitude to 6.5 from an initial reading of 6.4 and issued a yellow alert for expected fatalities and damage.

Indonesia experiences frequent seismic and volcanic activity due to its position on the Pacific “Ring of Fire”, where tectonic plates collide. Aceh lies on the northern tip of Sumatra island, which is particularly prone to quakes. In June, a 6.5-magnitude quake struck off the west of Sumatra, damaging scores of buildings and injuring eight people. A huge undersea earthquake in the Indian Ocean in 2004 triggered a tsunami that engulfed parts of Aceh. The tsunami killed more than 170,000 people in Indonesia and tens of thousands more in other countries around the Indian Ocean. samaa