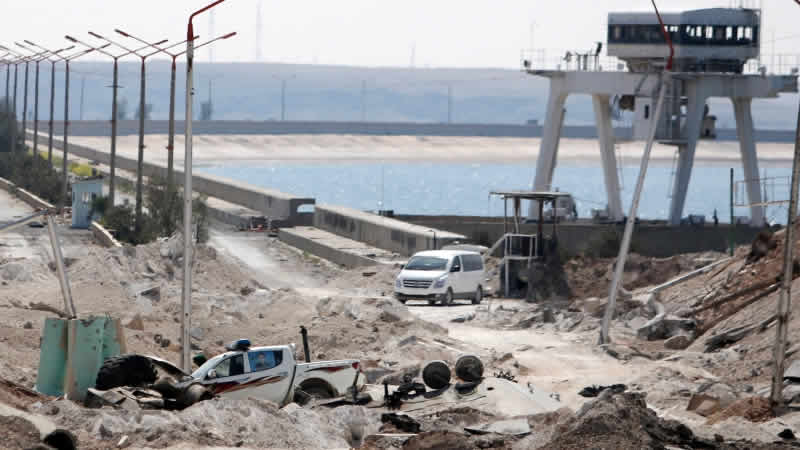 Syrian Democratic Forces say they now control all of the key city and an adjacent dam east of ISIL stronghold of Raqqa.

A US-backed alliance of Syrian Kurdish and Arab fighters has fully captured the city of Tabqa and a strategic dam nearby from ISIL, according to the group and a monitor.

The Syrian Democratic Forces (SDF) said on Wednesday it had taken full control of the contested city with the help of US-led coalition air raids after more than a month of heavy fighting. Our forces have seized control of both the dam and the city of Tabqa,” Jihan Sheikh, of the Ghadab al-Furat (dubbed Wrath of the Euphrates) told. Ghadab al-Furat is a Kurdish group fighting under the SDF. They launched a campaign in October 2016 to retake Raqqa, the de facto capital of the Islamic State of Iraq and the Levant (ISIL), in northern Syria. The Syrian Observatory for Human Rights, a UK-based monitor that relies on a network of contacts on the ground to track developments in Syria’s war, also confirmed the SDF’s takeover of the area.

The city and the adjacent Tabqa dam are key objectives in the US-led coalition’s push to retake ISIL’s self-proclaimed capital of Raqqa. In March, fears about the major hydroelectric dam’s integrity after fighting had forced it out of service led to a brief pause in military operations amid warnings that a collapse would be “catastrophic”. The recapture of Tabqa leaves no other major ISIL-held urban settlements on the eastern road to Raqqa. Al Jazeera’s Charles Stratford, reporting from Gaziantep along the Syria-Turkey border, called the capture a “significant development”, particularly following Washington’s recently-announced decision to arm the Kurdish fighters battling ISIL in Syria. The US has said the SDF, particularly its core component, the Kurdish Peoples’ Protection Units (YPG), are its most effective ground partner in the fight against ISIL in Syria.

US President Donald Trump on Monday authorised the direct shipment of arms to the YPG to facilitate the takeover of Raqqa, drawing intense opposition from Turkey. Ankara says the YPG is an extension of the Kurdistan Workers’ Party (PKK) separatists inside Turkey that have waged an armed campaign since 1984. The SDF assault on Tabqa began after US forces helped its fighters conduct an airborne and water crossing of the Euphrates in late March. According to Pentagon estimates from last year, the SDF has more than 40,000 fighters. ISIL captured Raqqa in January 2014, and took a nearby airbase from the Syrian government in August the same year. It lost the strategic airbase, about 45km west of Raqqa, to the SDF last month.

The United Nations said in a recent press release that at least 39,000 newly-displaced people fled to the Jib Al-Shaair makeshift camp in Raqqa, where four out of five people are staying in the open air without appropriate shelter. As the Syrian conflict enters its seventh year, nearly half-a-million people have been killed in the fighting and more than 12 million Syrians – half the country’s pre-war population – have been forced from their homes.