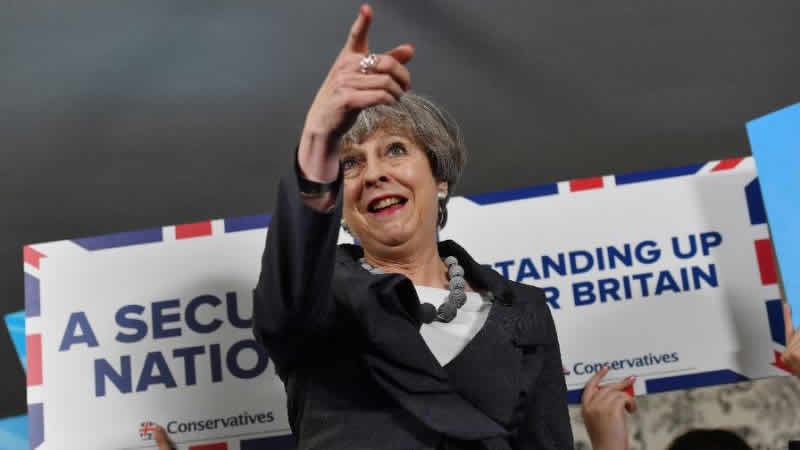 Britain braces for the final day of general election campaigning on Wednesday, after a turbulent few weeks which have shifted the political ground and been marred by terror attacks.

Prime Minister Theresa May was riding high when she called a snap election on April 18, having kicked off Brexit proceedings and boasting a double-digit lead over the rival Labour party.

But in recent weeks, the Conservative leader has seen her popularity wane as the political debate shifted from EU membership to domestic policy and her own record on security. Give me your backing to lead Britain, give me the authority to speak for Britain, strengthen my hand as I fight for Britain,” May urged voters on Tuesday in Stoke-on-Trent, the city that registered the highest vote for leaving the European Union. With formal Brexit talks due to start on June 19, May is hoping to sweep up supporters from the UK Independence Party as well as taking seats from Labour. The Conservatives have run a presidential-style campaign, promoting May as the “strong and stable” leader to fight Britain s corner in Brussels and warning that Labour s Jeremy Corbyn is not up to the task. Despite being seen as an unlikely leader  one who has faced off a rebellion by his own MPs Corbyn has gained momentum during the election campaign and regularly attracts big crowds to his rallies.

Labour gained a boost following the May 18 release of the Conservatives manifesto, outlining elderly care costs which the tabloids dubbed the “dementia tax”. The pledge hit the party s core supporters and May was forced to backtrack on capping the costs, prompting further criticism that she was unreliable. A “Liar, Liar GE2017” election protest song which targeted May and the Conservatives has made waves, reaching number four in the weekly charts on Friday. But even though the prime minister has faced a tougher campaign than expected, the Conservatives are still ahead in the polls. According to a poll published Tuesday by the group Survation, May s one-time 20-point lead over Labour has shrivelled to just over a single point — 41.6 percent to 40.4 percent. Bookmakers, meanwhile, forecast May will win an increased majority.

Ladbrokes predict the Conservatives present majority will rise from 17 to 70 seats, while William Hill suggests a more modest increase to between 40 and 50. Since failing to predict the outcome of the last general election and the Brexit referendum, pollsters have adjusted their methodologies and broadly show the Conservatives ahead despite their lead narrowing. The final day of campaigning comes under the shadow of security concerns, following three terrorist attacks since March all involving assailants who were known to the authorities. In the most recent attack, seven people were killed on Saturday when three men drove into pedestrians and went on a stabbing spree in central London before being shot by police.

Attacker Khuram Shazad Butt was known to British intelligence services, while an Italian prosecutor said Britain was notified that one of his accomplices, Youssef Zaghba, was a “possible suspect” back in March 2016. Their rampage followed a similar attack next to British parliament in March, in which assailant Khalid Masood was shot after killing five people. In the most deadly attack, Salman Abedi killed 22 people at a Manchester concert venue on May 22 when he detonated a suicide bomb. The electorate usually favours the Conservatives on security issues, but May has come under fire for her record during the six years she served as interior minister. The devastating terror attacks have also heightened public admiration for the emergency services, which have faced government cuts in recent years.