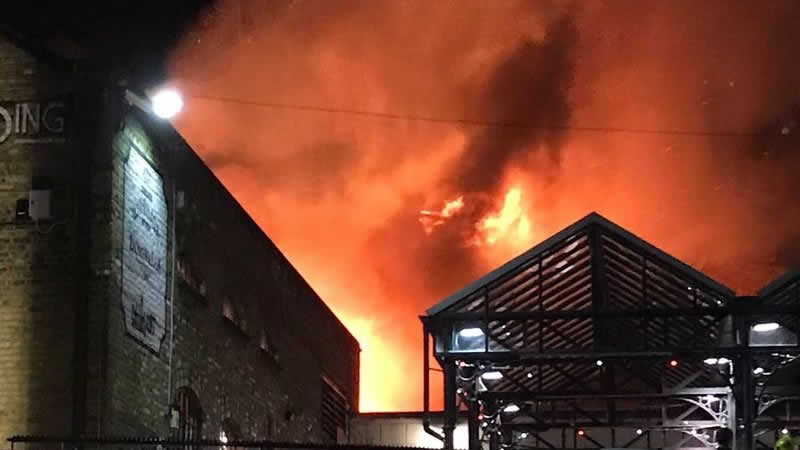 Seventy firefighters battled a large fire in a building in London’s popular Camden Lock Market in the early hours of Monday, the London Fire Brigade said.

The emergency service said it had also sent 10 fire engines to the scene, near a nightclub and a covered market. There were no reports of any casualties. The first, second and third floors, plus the roof, of a building within the market are alight,” the London Fire Brigade said on Twitter.

“The Brigade’s 999 Control Officers have taken multiple calls to the highly visible blaze and people are asked to avoid the area,” it said on Facebook. Images shared on social media showed tall flames and a burnt out building at the north London market, which is popular with Londoners and tourists.

“The fire was moving very fast,” witness Joan Ribes, 24, told the Press Association. He said the fire “was flying through the air to the surrounding areas”. People were watching, but we were scared the building could explode at any time since there are restaurants with kitchens nearby,” he said.

A London Ambulance Service spokeswoman said they were called to a fire at 00:07 am (2307 GMT on Sunday). We sent a clinical team leader and our Hazardous Area Response Team to the scene. “We have not treated any patients, and we remain at the scene,” she said.