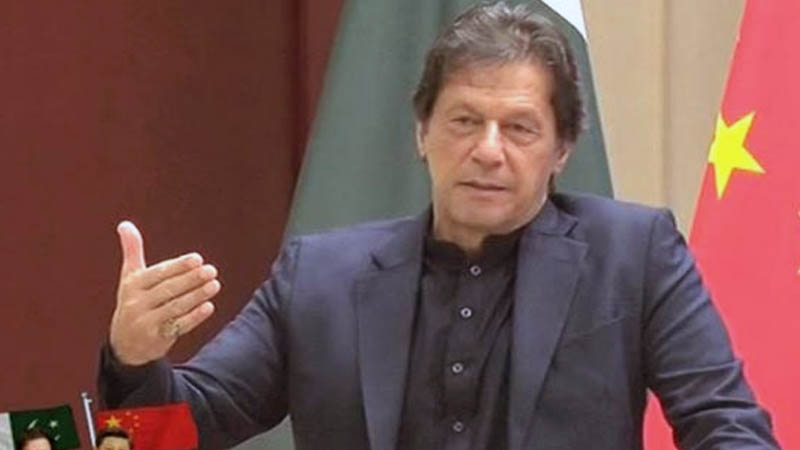 Prime Minister Imran Khan on Tuesday, while addressing an event in Beijing, expressed wish that he could follow the example of Chinese President Xi Jinping and send 500 corrupt individuals to jail in Pakistan.

The premier addressed China Council for Promotion of International Trade in Beijing and outlined that Pakistan has taken measures to facilitate businesses.

“One of President Xi Jinping’s biggest drives has been against corruption as I had heard that some 400 ministerial-level people had been convicted on charges of corruption and put behind jail in the past five years in China.”

“I wish I could follow President Xi’s example and put 500 corrupt people in Pakistan in jail,” he said. He appreciated Chinese President Xi Jinping’s campaign to eradicate corruption.

However, he said that processing cases in Pakistan was “very cumbersome”. He termed corruption as one of the biggest hurdles to investment in a country.

Besides, PM Khan has invited Chinese companies to invest in the diverse sectors of Pakistan including housing, textile, manufacturing, information technology (IT) and financial services, physical and technological logistics, agriculture, oil and gas, and tourism and hospitality.

“It’s an exciting time in Pakistan because as we open up our country for business, it is a great opportunity for people to come and invest, and as we change the mindset in Pakistan, we want businesses to come and make money.”

He assured that the PM Office would deal with all major investments including those of the CPEC. The PM mentioned to have established the CPEC Authority to resolve all outstanding issues hindering the implementation of the CPEC projects.

He said Gwadar smart port city master plan has been approved. “Work on the Gwadar airport is in progress and it will be completed soon […] we are now especially concentrating on our Special Economic Zones (SEZs)” he said.

Khan said Pakistan has been encouraging businesses to make big profits as stable economy would enable the state to lift the people out of poverty on the pattern of China.

He said the second phase of the CPEC would primarily focus on industrial and agriculture cooperation. He said Pakistan aims to learn from the experiences of China to enhance the productivity of our agriculture sector.

The PM said security situation has improved in Pakistan due to the efforts of security forces and intelligence agencies.

“Pakistan is one of the safest places for investment in the world. We have established a special security force for the protection of Chinese workers.”

He said the present government has also liberalised the visa regime and the Chinese nationals could obtain visa-on-arrival at the international airports.

Alluding to the geostrategic location of Pakistan, Imran Khan said Pakistan’s unique location and its young and vibrant population has made it an attractive country for investment.

He said our labor cost was only about 20 percent of that in China. The PM said his government has taken a conscious decision to ensure ease of doing businesses.

PM Khan hailed economic progress achieved by China, saying that it was an example for the whole world how the country has lifted 700 million people out of poverty over the last 30 years.

Importantly, the chairman of the China Metallurgical Group Corporation – the longest running construction group in China’s iron and steel industry – also called on the premier.

According to Radio Pakistan, Prime Minister Imran was presented a guard of honour by a smartly turned out contingent at the official welcome ceremony where the national anthems for both China and Pakistan were played.

Upon PM Khan arrived in Beijing on Tuesday morning, the premier was received by China’s culture minister Luo Shugang, Chinese Ambassador to Pakistan Yao Jing and Pakistan’s ambassador to China Naghmana Hashmi. The Pakistani Prime Minister was presented with the Tri Services Static Guard by a smartly turned out contingent.