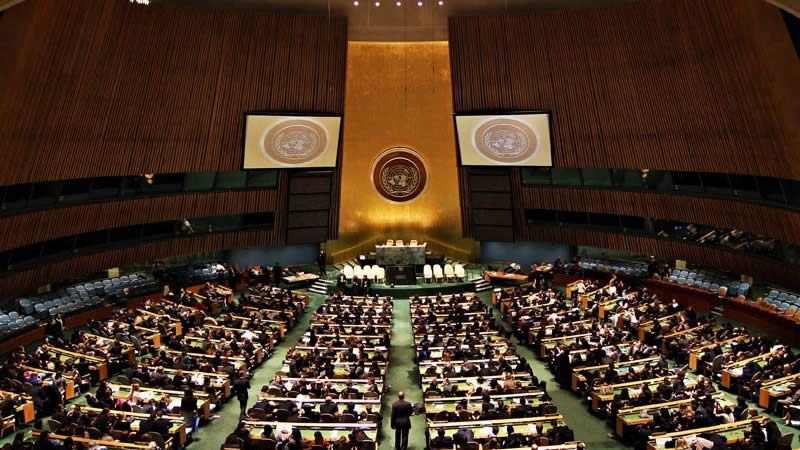 The United Nations General Assembly has approved a Pakistan-sponsored resolution that reaffirms the right to self-determination for peoples subjected to colonial, foreign and alien occupation.

The 193-member body adopted the resolution by consensus on Wednesday afternoon when it also considered other human rights issues.

The resolution — “Universal realisation of the right of peoples to self-determination” — clearly stating that self-determination is a fundamental right of all peoples — including those under colonial, foreign and alien domination.

The resolution, which was co-sponsored by 71 countries, observed that “self-determination is a fundamental condition for the guarantee and observance of human rights”.

The world body also “deplored the plight of millions of refugees and displaced persons who have been uprooted as a result of such acts and reaffirmed their right to return”.

Pakistan’s UN Ambassador Munir Akram said that by adopting Pakistan’s resolution, the General Assembly had “reaffirmed our legal, political and moral case in support of all peoples, including the Kashmiri people, to struggle for self-determination against foreign occupation by all means available to them”.

The text of the resolution was recommended last month by the General Assembly’s Third Committee, which deals with social, humanitarian and cultural issues. While taking up a report on “Social development”, the assembly also “stressed the importance of removing obstacles to realizing the right to self-determination”.

It urged all states and specialised UN agencies to continue to assist Palestinians in the early realisation of this right.

The United States, Israel, Marshall Islands, Federated States of Micronesia and Nauru voted against the resolution.

Ambassador Akram said the resolution on self-determination had empowered legitimate freedom movements and had also renewed international commitment to help those living under occupation and subjugation. Pakistan, he said, would continue to speak up for all peoples who were suffering under foreign occupation. “This has been a cornerstone of our foreign policy and we are proud to be a voice of the voiceless,” he added.

The General Assembly also proclaimed Aug 31 as the International Day for People of African Descent to “promote greater recognition and respect for the diverse heritage, culture and contribution of people of African descent to the development of societies”.

The Assembly deferred action on two draft resolutions: “Situation of human rights of Rohingya Muslims and other minorities in Myanmar”, and “a global call for concrete action for the elimination of racism, racial discrimination, xenophobia and related intolerance”. The resolutions would be reviewed after budgetary considerations.