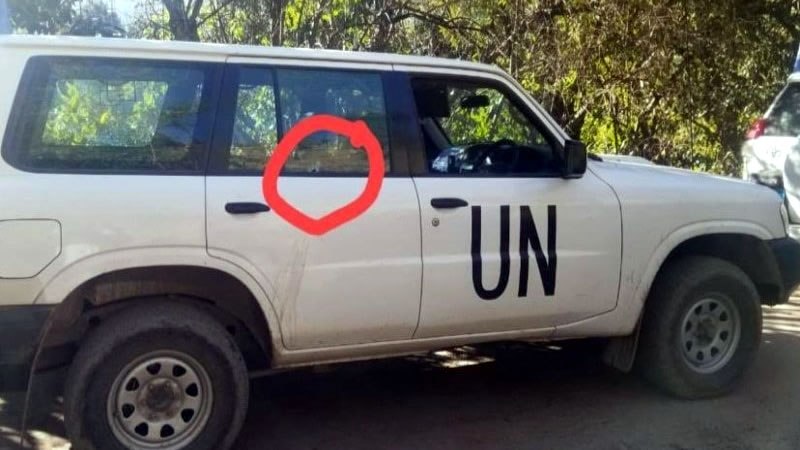 With yet another Kashmiri woman falling victim to unrelenting ceasefire violations by Indian troops only a day after they targeted a vehicle of the UN Military Observer Group in India and Pakistan along the Line of Control (LoC), Pakistan has taken up the reprehensible attack on the UNMOGIP with the UN, urging it to initiate a transparent investigation into the incident.

As the situation along the LoC continued to deteriorate, Pakistan’s Permanent Representative to the UN in a letter addressed to the UN Secretary General (UNSG) and the president of the UN Security Council requested them to forcefully condemn the attack on UNMOGIP members and ask India to respect 2003 ceasefire understanding, while Prime Minister Imran Khan warned the world community that in case of any false-flag operation, India would be given a befitting response at all levels of the threat.

Also, a senior Indian diplomat was summoned to Foreign Office to register Pakistan’s strong protest over ceasefire violations by the Indian occupation forces along the LoC, resulting in serious injuries to an innocent civilian on Saturday, according to a FO statement issued here on Sunday. Sagheera, 25-year-old daughter of Mohammad Haneef, sustained serious injuries when Akhori village in the Rakhchikri sector of the LoC faced indiscriminate and unprovoked firing from Indian troops.

PM Khan in a series of tweets on Sunday said that India’s deliberate firing on the UNMOGIP vehicle despite clear UN markings and flying blue UN flag showed India’s total disregard for all international norms of acceptable state behaviour and respect for international law and United Nations.

Pakistan strongly condemned this rogue behaviour, he said. “I want to again warn the world community, as India’s internal problems mount, especially economic recession, growing farmers protests and mishandling of COVID 19, the Modi government will divert from the internal mess by conducting a false flag operation against Pakistan. I am making absolutely clear to the int community that if India was to be reckless enough to conduct a false flag operation against Pakistan, it would confront a strong national Pakistani resolve and be given a befitting response at all levels of the threat. Make no mistake.”

The PM said already, in 2020 alone, there have been 3,000 Indian ceasefire violations along the LoC and Working Boundary, by unprovoked firing deliberately targeting civilians — resulting in 276 casualties, of which 68 were children and 92 were women.

Highlighting the atrocities and crimes committed by Indian occupying forces against the innocent Kashmiris, particularly since August 2019, Pakistan has already been drawing world’s attention to India’s ultimate plan is to change the demography of Indian illegally occupied Jammu and Kashmir from a Muslim-majority area into a Hindu-majority territory.

In a letter to the UN secretary general and UNSC president, Pakistan’s permanent representative to the UN stated that deliberate targeting of the UN Observers and their vehicle appeared to be a new coercive and reckless ploy by India to hinder UNMOGIP’s work, and facilitate another Indian military misadventure against Pakistan.

The letter said Pakistan had credible information that the RSS-BJP government was planning to stage a ‘false flag’ attack to divert attention from its domestic difficulties, and create justification for another misadventure against Pakistan. If that were to happen, Pakistan would exercise its right to self-defence, the letter made it clear.

The permanent representative requested the UN to forcefully condemn the Indian attack on the UNMOGIP members and call on India to observe the 2003 ceasefire understanding. The UN must respond positively and urgently to repeated calls by Pakistan to strengthen UNMOGIP and improve its ability to observe and report on ceasefire violations, the letter contended.

Pakistan also reminded the UN that the illegal and inhuman military siege and communications lockdown in the occupied territory had lasted over 500 days, with India’s ultimate plan being able to turn the IIOJK from a Muslim-majority area into a Hindu-majority territory.

According to the Ministry of Foreign Affairs website, Pakistan has taken up the reprehensible attack by India on the UNMOGIP Observers and their vehicle along the Line of Control (LoC) with the United Nations, urging it to initiate a transparent investigation into the incident.

The Foreign Office (FO) condemned the deplorable targeting of innocent civilians by the Indian occupation forces, underscoring that such senseless acts were in clear violation of the 2003 ceasefire understanding, and were also against all established humanitarian norms and professional military conduct. The egregious violations of international law reflected consistent Indian attempts to escalate the situation along the LoC and were a threat to regional peace and security, the FO statement added.

By raising tensions along the LoC and the WB, India could not divert attention from the grave human rights situation in the IIOJK, it said.

The Indian side was once again called upon to investigate incidents of deliberate ceasefire violations and maintain peace along the LoC and the WB. India was also asked to allow the UNMOGIP to play its mandated role as per the UNSC Resolutions.