Afghanistan to top agenda in talks with Russian FM 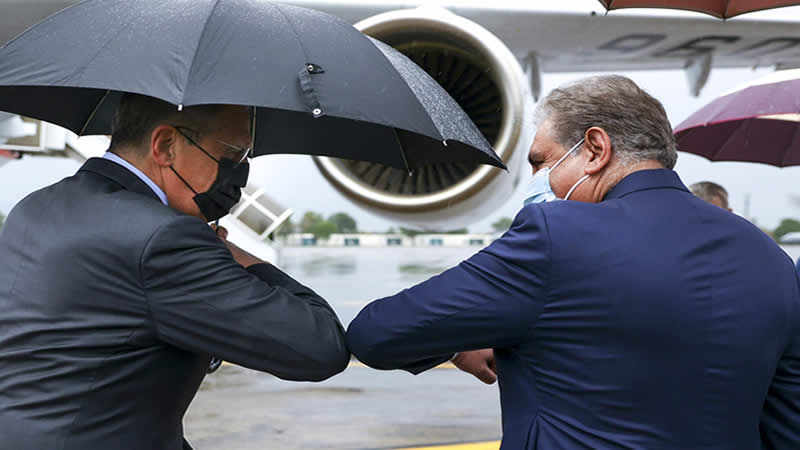 Russian Foreign Minister Sergey Lavrov arrived here on Tuesday on a two-day official visit to Pakistan to hold wide-ranging talks with his Pakistani counterpart, with issue of Afghanistan high on the agenda.

He was received at the Chaklala airbase by Foreign Minister Shah Mahmood Qureshi. This is the first visit of a Russian foreign minister to Pakistan since 2012.

During the talks the entire gamut of Pakistan-Russia relations will be reviewed and ways discussed to further broaden and deepen bilateral cooperation in diverse fields. The two foreign ministers will also exchange views on regional and international issues.

Foreign Minister Lavrov’s visit is part of the growing interaction and regular high-level exchanges between Pakistan and Russia.

Pakistan and Russia enjoy friendly and cooperative relations based on mutual respect, trust and understanding. Bilateral cooperation is growing across a wide range of areas of common interest, including security and defence, counter-terrorism and the Afghan peace process. In the recent past, deepening collaboration in economic, trade and energy sectors has been the focus of the two governments.

The discussions will cover the current state and prospects for development of better relations with an emphasis on cooperation in trade, economic and counter-terrorism fields.

Views will be exchanged on topical issues of the international and regional agenda.

“Today Pakistan is an important foreign policy partner of our country. Fruitful interaction is maintained at the international organisations, primarily in the UN and its specialised agencies. The cooperation between Moscow and Islamabad is based on the coincidence or similarity of positions on most of the problems of the world community, including issues of strategic stability and countering terrorism,” said a statement issued by the Russian Foreign Ministry.

“Opportunities for joint work have significantly expanded after Pakistan’s accession to the SCO as a full member in June 2017,” the statement said, adding that an intensive political dialogue was maintained, including at the high and the highest levels.

“President of the Russian Federation Vladimir Putin spoke with the Prime Minister of the Islamic Republic of Pakistan Imran Khan on the sidelines of the SCO CHS meeting in Bishkek in June 2019; Russian Foreign Minister Sergey Lavrov had a conversation with Pakistani Prime Minister “on the sidelines” of the 74th session of the UN General Assembly in New York in September 2019. Meetings of Foreign Ministers of the two countries Sergey Lavrov and Shah Mahmood Qureshi are held regularly (the previous meeting was held in September 2020 in Moscow within the framework of the SCO CFM meeting).

“The priority task is to expand trade and economic ties. In 2020, the volume of trade amounted to a record $790 million, an increase by 46% was inter alia due to large supplies of Russian wheat. Within the framework of the Intergovernmental Commission on Trade, Economic, Scientific and Technical Cooperation, specific projects of business partnership are discussed. The sixth meeting of the Intergovernmental Commission took place in Islamabad in December 2019.Energy is a promising area of business partnership. The flagship project is the construction of the North-South gas pipeline from Karachi to Lahore under the Intergovernmental Agreement signed in 2015. Negotiations are underway with a view to an early start of its practical implementation. Other promising projects include the modernisation of the Karachi Steel Mills built with the assistance of the USSR, the reconstruction of the energy and railway systems of Pakistan, as well as the supply of Russian civil aircraft,” the statement concluded.