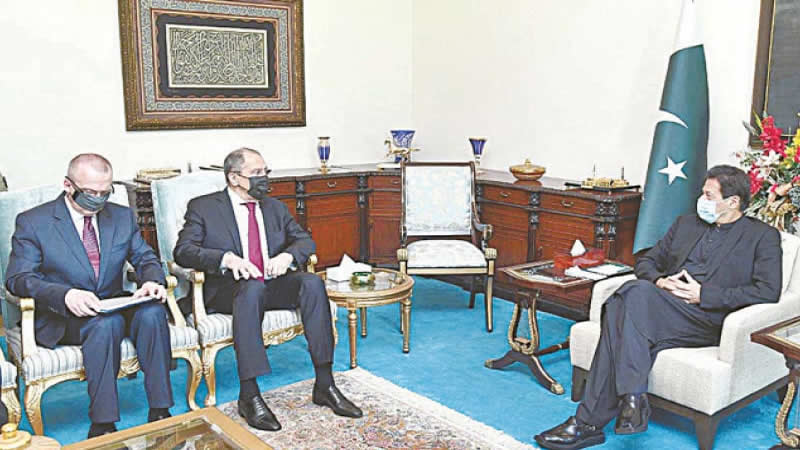 Pakistan and Russia on Wednesday agreed to boost cooperation in diverse areas including defence and counterterrorism.

An understanding to this effect was reached during talks between the two sides here at the Foreign Office.

Pakistan’s team was led by Foreign Minister Shah Mahmood Qureshi while the visiting Russian delegation was led by his Russian counterpart Sergey Lavrov.

During the talks, the foreign ministers reviewed the entire gamut of the bilateral relationship, besides having an in-depth discussion on situation in the war-torn Afghanistan.

While speaking at a joint press conference with Mr Qureshi later, FM Lavrov said Russia was ready to build further counterterrorism potential through provision of military equipment to Pakistan. “This is in the interest of all states of the region,” he said, adding that both sides also agreed on joint military exercises and drills.

He said Russia was committed to promoting bilateral cooperation with Pakistan in diverse fields including economy, trade and defence. He expressed satisfaction over the 46 per cent increase in bilateral trade but noted that there was a potential to increase and diversify it.

About the opportunities in the energy sector, Mr Lavrov said both countries were discussing a new protocol on the Stream Gas Pipeline project and as soon as it was signed, construction work on the project would start.

Expressing concern over the deteriorating security situation in Afghanistan, Mr Lavrov said Pakistan and Russia had agreed to facilitate the parties for an agreement to put an end to civil war in Afghanistan through an inclusive political dialogue. “We have agreed to further contribute to creating conditions to ensure that the conflicting sides achieve constructive solutions, which will allow them to end the civil war in Afghanistan through the agreements on forming inclusive power structures,” Mr Lavrov said.

Terming the relationship between the two countries mutually beneficial and constructive, the Russian foreign minister said: “We have provided 50,000 doses of anti-Covid vaccine to Pakistan and intend to provide 150,000 more”.

He said the two sides had agreed to hold the intergovernmental commission (IGC) meeting this year in Moscow. He expressed the confidence that the meeting would lay the foundation of a more meaningful economic relationship between the two countries.

Referring to the stream gas pipeline project, he said: “We have overcome many of the obstacles and Pakistan wants to go ahead and is committed to the project.”

He said he also briefed Mr Lavrov about the current situation in India-held Kashmir.

Mr Qureshi termed the Russian foreign minister’s visit important, saying that it was taking place after almost a decade. He noted this visit would further deepen bilateral relationship and friendship and the two countries intended to maintain high-level contacts and momentum.

The relations between Pakistan and Russia had come a long way from the cold war hostility to current level of strategic relationship, with the hope of continued expansion of bilateral cooperation in various fields.

During his meeting with PM Khan, Pakistan-Russia bilateral relations and issues of regional and global importance were discussed.

The prime minister fondly recalled his interaction with President Vladimir Putin during the Shanghai Cooperation Organisation (SCO) summit in Bishkek in June 2019, where he had underscored his desire to take the bilateral relationship to a new level.

The prime minister reiterated the importance Pakistan attaches to its relations with Russia as a key foreign policy priority.

Enhanced bilateral cooperation in the fields of energy, industrial modernisation, railways and aviation also came under discussion. It was agreed that the IGC in its Moscow meeting later this year would closely pursue specific proposals and projects in this context.

In the regional context, the PM highlighted the importance of a negotiated political settlement of the Afghan conflict. Pakistan appreciated Russia’s efforts in promoting the Afghan peace process, including through the hosting of the recent meeting of extended troika in Moscow.

With reference to the situation in India-held Kashmir, the PM shared Pakistan’s perspective on issues of peace and security in South Asia, including the need for peaceful resolution of the longstanding dispute of Jammu and Kashmir.

The Russian foreign minister also met Pakistan military leadership during his visit to the General Headquarters in Rawalpindi.

At the meeting, matters of mutual interest including enhanced defence and security cooperation and regional security, particularly the Afghan peace process, came under discussion.

Chief of the Army Staff General Qamar Javed Bajwa apprised the foreign minister that Pakistan had no hostile designs towards any country and it would keep on working towards a cooperative regional framework based on sovereign equality and mutual progress.

Gen Bajwa said Pakistan welcomed all initiatives aimed at bringing peace and stability in Afghanistan, as the whole region would benefit from it.

The visiting dignitary acknowledged Pakistan’s achievements in the war against terrorism and contributions for regional peace and stability especially Pakistan’s sincere efforts in the Afghan peace process.