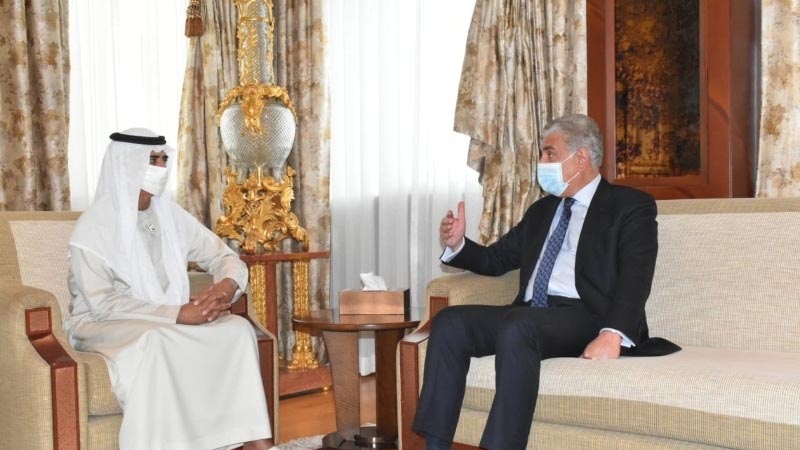 Foreign Minister Shah Mahmood Qureshi, who is on a visit to UAE, in his meeting with the Emirati Minister for Tolerance and Coexistence, Sheikh Nahyan Mabarak Al Nahyan, and Minister of State for Foreign Affairs Ahmed bin Ali Al Sayegh raised the issue of visa restrictions on Pakistanis, according to a readout issued by the Foreign Office.

“The foreign minister briefed Sheikh Nahyan about the issues faced by the Pakistani community, in particular the restrictions on visa-related matters. He stressed the importance of resolving them at the earliest,” the FO said.

Sheikh Nahyan is an influential member of the Emirati royal family. He has investments in Pakistan’s telecom and banking sector. He also owns a personal gaming reserve in Sindh.

Mr Qureshi in his meeting with Mr Sayegh, according to FO, also took up the issue of visa restrictions.

In November last year, the UAE banned work visas for Pakistani nationals. Although the ban was imposed along with similar restrictions on a number of Muslim countries, Pakistan that heavily relies on remittances from the Emirates was particularly affected.

The restrictions were attributed to Covid-19 pandemic, but many believe that the move was based on security considerations in the aftermath of important geo-political developments that happened towards the end of the last year.

There were also reports of Pakistanis expatriates facing difficulties in the renewal of their permits and other instances of discrimination. Some Pakistanis were picked up by the Emirati security agencies.

About 1.6 million strong Pakistani Diaspora lives in the UAE.

Mr Qureshi underscored “the positive role” played by the Pakistani expatriates towards development of both countries and noted that the UAE leadership had been “considerate” towards expatriates.

The FO said Sheikh Nahyan acknowledged the positive contribution of the Pakistani expatriates to the UAE’s progress.

The two leaders discussed the prospects of enhancing bilateral cooperation particularly in the fields of investment, tourism and related infrastructure.

The two ministers also exchanged views on the importance of tolerance and coexistence in presenting the true image of Islam and the Islamic society, besides discussing EXPO 2020 Dubai. Pakistan is having a pavilion at the exhibition slated to be held in October. The pavilion aims at successfully showcasing Pakistan’s ‘Hidden Treasure’.

IRAN: FM Qureshi is reaching Tehran on Tuesday in the next leg of his overseas trip.

Border security and trade feature high on the foreign minister’s agenda in Tehran.

Iranian Foreign Ministry spokesman Saeed Khatibzadeh, according to Irna, said at a virtual press conference on Monday that Mr Qureshi’s visit to Tehran was important. He noted that the relations between the two countries are deep and wide.

Mr Khatibzadeh said that besides discussing bilateral issues the two sides will open the third cross-border gateway between the two countries.

The two sides are expected to discuss Afghan peace process during the foreign minister’s trip.

Mr Qureshi would travel to Istanbul for participating in the Afghan peace conference being held there.