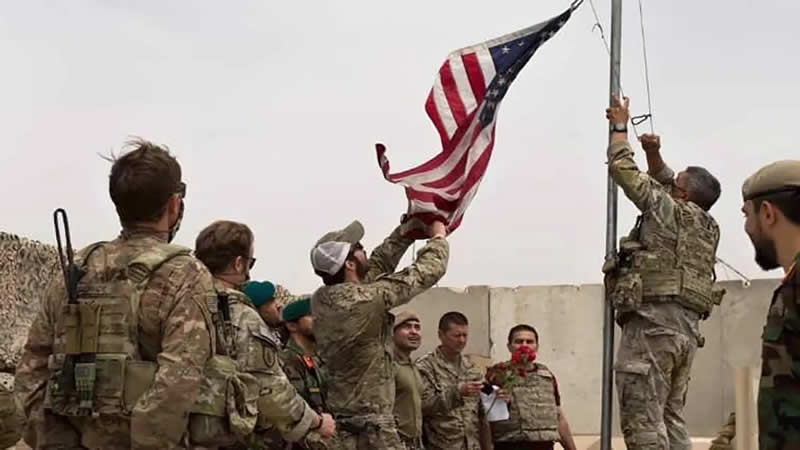 Thousands of Afghans started to flee their homes as fierce fighting erupted between government forces and the Taliban in Helmand province on Monday after the US military began withdrawing its remaining troops from Afghanistan, officials said.

Afghan forces claimed pushing back the Taliban on multiple checkpoints in the southern province of Helmand, where the US military handed over a base to government forces on Sunday after its formal pullout began on May 1.

About 1,000 families have fled their homes after fighting erupted on the outskirts of Lashkar Gah, the capital of Helmand, and some other parts of the province, said Sayed Mohammad Ramin, the region’s director for refugees.

He said the families had taken refuge in Lashkar Gah and had come from areas where fighting was intense in the past two days.

“We will survey their needs tomorrow, but many who still have not found shelter in the city need urgent assistance,” Ramin said.

The defence ministry said government forces killed more than 100 Taliban fighters in Helmand when the militants attacked some checkpoints on the outskirts of Lashkar Gah.

Another 22 Al Qaeda fighters from Pakistan were also killed in the fighting, the ministry claimed.

Officials said the Taliban fighters initially captured some checkpoints, but they were retaken by government forces who pushed back the militants.

“The enemy has now lost all the areas it had captured and suffered heavy casualties,” Attaullah Afghan, head of Helmand’s provincial council, said.

The Taliban said a large number of Afghan troops were killed in the fighting. Both sides are known to exaggerate casualties inflicted on the other.

Fighting has also erupted in several other provinces since the US military formally began pulling out its remaining 2,500 troops on May 1.

The Pentagon has downplayed the fighting.

“We’ve seen nothing thus far that has affected the drawdown, or had any significant impact on the mission at hand in Afghanistan,” US Department of Defence spokesman John Kirby said on Monday.

Nearly 20 years after US and allied Nato troops invaded Afghanistan and ousted the Taliban government as they pursued Al Qaeda after the Sept 11, 2001, attacks, President Joe Biden ordered the final withdrawal last month.

The Taliban attacks on government forces have raised concerns that American troops were also at risk as they pull out.