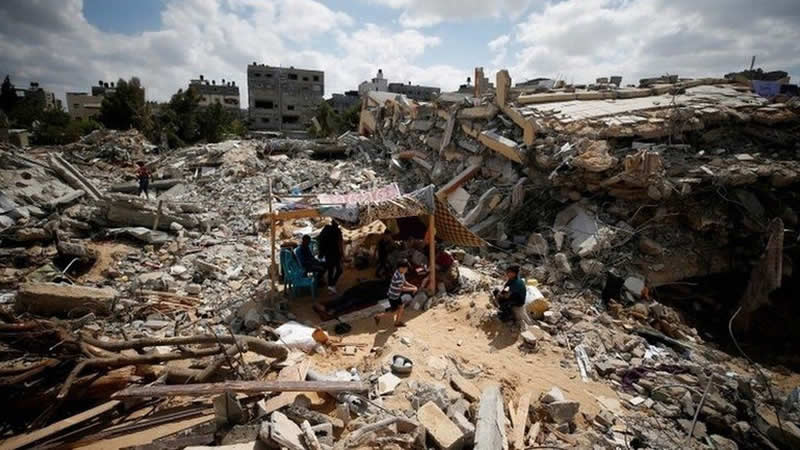 The US has promised to repair ties with the Palestinians by reopening a consulate in Jerusalem and help rebuild the conflict-torn Gaza Strip.

More than 250 people were killed in 11 days of fighting between Gaza militants and Israel earlier this month.

The vast majority of the victims were in Gaza.

The violence came after weeks of increasing Israeli-Palestinian tension in occupied East Jerusalem which culminated in clashes at a holy site revered by both Muslims and Jews.

The Democrats’ ‘tectonic’ shift on the conflict
A conflict on pause as both sides claim victory
How much money does Israel get from the US?
In pictures: The destruction in Gaza and Israel
The fighting ended last Friday with an Egyptian-brokered truce.

US seeks millions to rebuild Gaza
Mr Blinken tweeted that he discussed “deepening America’s partnership with the Palestinians” during his Tuesday’s talks with Palestinian Authority President Mahmoud Abbas and Prime Minister Mohammad Shtayyeh in Ramallah.

He promised to advance the process of reopening the US consulate in Jerusalem that had served as its diplomatic channel to the Palestinians.

The consulate was closed by President Joe Biden’s predecessor Donald Trump in 2019, angering the Palestinians and straining bilateral relations.

The former president put the Palestinians under the authority of his ambassador to Israel when he relocated the embassy from Tel Aviv to Jerusalem.

A senior Palestinian official told the AFP news agency that discussions were taking place over reopening the Palestine Liberation Organisation (PLO) office in Washington DC, which was closed during the Trump administration.

To help rebuild Gaza, the Biden administration has recently said it will ask Congress for $75m (£52m) in assistance.

He added that the US would also provide $5.5m in immediate disaster assistance for Gaza and $32m to the United Nations Relief and Works Agency (UNRWA), the UN agency for Palestinian refugees.

But Mr Blinken stressed that Washington would ensure that Hamas, which controls Gaza, did not benefit.

Hamas is designated as a terrorist group by the US, EU, UK and Israel.

‘We must build on’ ceasefire, Blinken tells Netanyahu
Mr Blinken started his three-day trip to the Middle East in Jerusalem earlier on Tuesday by meeting Israeli Prime Minister Benjamin Netanyahu.

“I underscored America’s ironclad commitment to Israel’s security, and we discussed the importance of promoting peace, security, and dignity for all,” Mr Blinken tweeted.

“We, too, will give meaning to our commitment to our self-defence: if Hamas breaks the calm and attacks Israel, our response will be very powerful,” the prime minister warned.

He also said he had discussed with Mr Blinken replenishing the Iron Dome missile defence system that protects Israel from Palestinian rocket fire, and ways to prevent Hamas rearming.

Mr Blinken said intense, behind-the-scenes diplomacy by President Biden had helped produce last week’s ceasefire, and that “now we believe we must build on it”.

He added: “We know that to prevent a return to violence we have to use the space created to address a larger set of underlying issues and challenges. And that begins with tackling the grave humanitarian situation in Gaza and starting to rebuild.”

The UN said on Sunday that 242 Palestinians, including 66 children and 38 women, were killed in the conflict, and that its human right’s office had verified that at least 129 of them were civilians.

It added that at least 230 of the Palestinian fatalities were seemingly killed by Israeli forces, and that some of the casualties in Gaza might have resulted from rockets falling short.

The Israel Defense Forces said it killed more than 200 militants during the fighting. Hamas and Islamic Jihad have not given overall casualty figures for their fighters.

In Israel, 13 people, including two children and three foreign nationals, were killed by Palestinian rocket or other fire, or when running for shelter during rocket attacks, its medical service said.

The UN cited the Palestinian housing ministry as saying 258 buildings, comprising 1,042 housing and commercial units, were destroyed during the fighting. In addition, 769 housing units were severely damaged and 14,536 suffered minor damage.

Fifty-four education facilities, six hospitals and 11 primary healthcare facilities were also damaged, as was water, sanitation, and electric infrastructure, according to the UN.

The Israeli government has not yet published its estimate for the damages, but many buildings and vehicles in Israel were damaged by rocket fire.