The United States said on Monday it had completed the withdrawal of its forces from Afghanistan following a chaotic airlift nearly 20 years after it had invaded the country in the wake of the Sept 11, 2001, attacks. 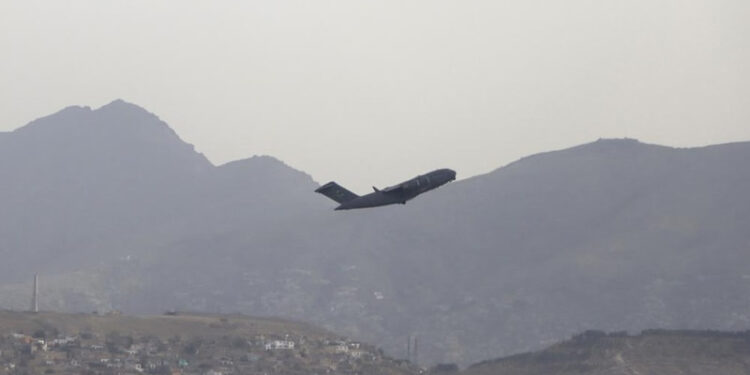 More than 122,000 people have been flown out of Kabul since Aug 14, the day before the Taliban regained control of the country.

The chief US diplomat in Afghanistan, Ross Wilson, was on the last C-17 flight out, Marine General Frank McKenzie, the head of US Central Command, told a Pentagon news briefing.

The emergency air evacuation came to an end before a Tuesday deadline set by President Joe Biden, who inherited a troop withdrawal deal made with the Taliban by his predecessor Donald Trump and decided earlier this year to complete the pullout.

A senior Taliban official said “we have made history”, as celebratory gunfire rang out across the Afghan capital after the last US troops pulled out.

“We made history again. The 20-year occupation of Afghanistan by the United States and Nato ended tonight,” said Anas Haqqani, a senior official in the Taliban movement, in a tweet. “I am very happy that after 20 years of jihad, sacrifices & hardships I have this pride to see these historic moments.”

The United States and its Western allies scrambled to save citizens of their own countries as well as translators, local embassy staff, civil rights activists, journalists, and other Afghans vulnerable to reprisals.

The evacuations became even more perilous when a suicide bomb attack on Thursday claimed by the militant Islamic State group — the enemy of both the West and the Taliban — killed 13 US service members and scores of Afghans waiting by the airport gates.

Biden, who faced intense criticism at home and abroad over his decisions, promised after the Kabul airport attack to hunt down the people responsible.

Tuesday’s deadline for all troops to leave was ordered by President Biden, fulfilling an agreement reached by his predecessor Donald Trump with the Taliban to end the US longest war. But having failed to anticipate that the Taliban would so quickly take over the country, Washington and its Nato allies were forced into a hasty evacuation.

The US and its allies have mounted the biggest air evacuation in history, bringing 114,000 of their own citizens and Afghans who helped them over 20 years of war in Afghanistan, but they will still leave behind thousands of Afghans who helped Western countries and might have qualified for evacuation.

On Monday morning, two US officials said the “core” diplomatic staff had withdrawn.

The US anti-missile defenses intercepted multiple rockets fired at Kabul’s airport early on Monday as the United States flew its core diplomats out of Afghanistan in the final hours of its chaotic withdrawal before the Tuesday deadline set by President Joe Biden for a complete pullout.

Initial reports did not indicate any American casualties from as many as five missiles fired on the airport whose responsibility was claimed by the militant Islamic State (IS) group three days after a suicide bomber had killed scores of Afghans and 13 US troops outside the teeming airport gates.

While Pentagon spokesman John Kirby called the threat to Kabul airport “real” and “specific”, the Taliban believe the exit of foreign forces would stop IS attacks, with its spokesman Zabihullah Mujahid warning that if they created a situation for war, the Taliban would deal with them. “We hope that those Afghans who are influenced by IS… will give up their operations on seeing the formation of an Islamic government in the absence of foreigners,” Mujahid said.

However, the group of countries that have banded together claiming to fight IS, including the US, released a statement pledging to work to eliminate the group and taking special aim at its affiliate in Afghanistan that took responsibility for Monday’s rocket attack on Kabul airport.

“We will draw on all elements of national power military, intelligence, diplomatic, economic, law enforcement to ensure the defeat of this brutal terrorist organization,” the coalition said in a statement released by the US State Department, which also said the countries would “identify and bring their members to justice.”

Also, Washington in recent days warned of more attacks, while carrying out two airstrikes against the ‘IS targets’ including the one on Sunday to thwart an ‘attempted suicide bombing’ by blowing up an ‘explosive-laden car’.

Also on Saturday, officials announced that two IS ‘plotters and facilitators’ were killed in a US drone strike on their vehicle in the Nangarhar area bordering Pakistan.

After the rocket attack on the airport, IS claimed responsibility according to the group’s Nasher News on its Telegram channel. “By the grace of God Almighty, the soldiers of the Caliphate targeted Kabul International Airport with six Katyusha rockets,” the IS stated.

Retaliatory or pre-emptive strikes by the US on the IS positions in the recent few days have angered the Taliban also. “There is no permission for them to do such operations… our independence must be respected,” Mujahid said.