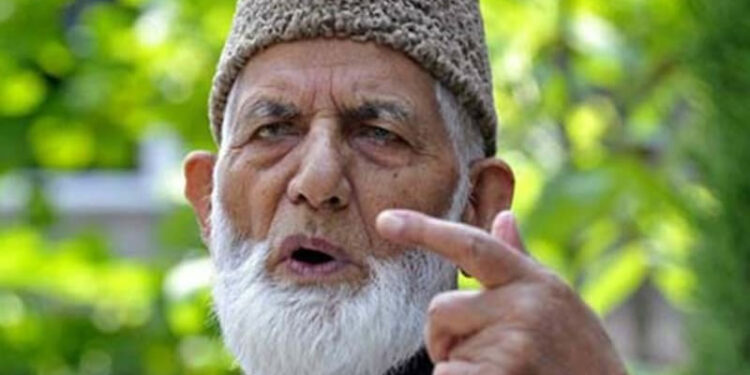 Kashmiri leader Syed Ali Geelani has passed away, people from both sides of the line of control have confirmed.

Indian authorities have imposed a clampdown in the Valley after his death, as people began to gather near his house in Srinagar.

Indian TV channels reported that internet services were suspended and movement was restricted.

Geelani, 92, was an unyielding campaigner against Indian rule in the disputed Himalayan region and had been under house arrest for the past 11 years.

He breathed his last at around 10:30 pm on Wednesday, Indian TV channel Times Now reported.

Geelani’s death was first reported by the news agency Kashmir Media Service which is based in the Indian held Kashmir.

Kashmiri leaders from both sides of the LOC have been sending condolence messages.

Geelani was a member of Jamat-i-Islami and former head of the All Pakistan Hurriyat Conference.

Jamat-i-Islami Pakistan spokesperson Qaiser Sharif confirmed that Geelani was no more. He said JI Pakistan was to offer funeral prayers in absentia on Thursday.

Clampdown After Geelani’s death
Indian authorities imposed a security clampdown in the Kashmir Valley after his death, residents told AFP.

Troops put up barbed wire rolls and barricades on roads leading to Geelani’s house in the main city of Srinagar after the family announced the death. Media reports said a curfew has been imposed.

“An alert has been sounded in the Valley, following his death. Restrictions have been imposed including suspension of internet services in the Valley, ” Times Now said citing IGP Kashmir Vijay.

He said Ali Geelani was “shaheed” (martyr). Yusuf urged India to allow Geelani’s family an appropriate funeral and warned that restriction would amount to playing with fire.

Heartbreaking news about the demise of Shaheed Syed Ali Geelani. He lived his life for the people of Kashmir and for their freedom from India’s illegal and oppressive occupation. He was a hero for Kashmiris and Pakistanis alike. May Allah (swt) rest his soul in peace 1/4 pic.twitter.com/SYJgfP5fRh

Prime Minister Imran Khan has announced one day mourning period to pay homage to the Hurriyat leader. The national flag will fly half-mast, a statement said.

Funeral prayers in absentia have been announced in all districts of Azad Kashmir.