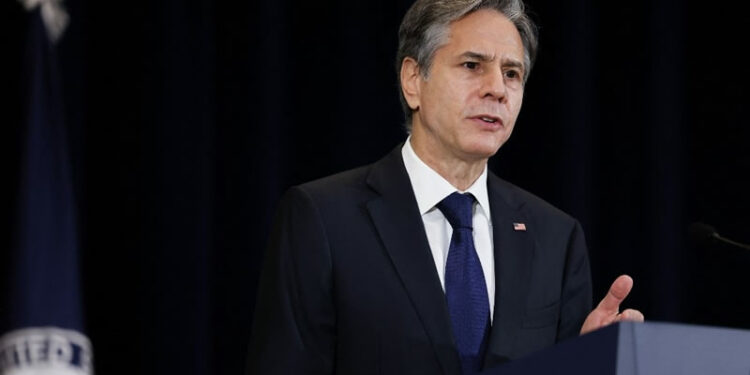 The United States will be looking at its relationship with Pakistan in the coming weeks, US Secretary of State Antony Blinken said on Monday, to formulate what role Washington would want it to play in the future of Afghanistan.

In the first public hearing in Congress about Afghanistan since last month’s collapse of the US-backed Afghan government, Blinken told the House of Representatives Foreign Affairs Committee that Pakistan has a “multiplicity of interests some that are in conflict with ours.”

“It is one that is involved hedging its bets constantly about the future of Afghanistan, it’s one that’s involved harboring members of the Taliban … It is one that’s also involved in different points cooperation with us on counterterrorism,” Blinken said.

Asked by lawmakers if it is time for Washington to reassess its relationship with Pakistan, Blinken said the administration would soon be doing that.

“This is one of the things we’re going to be looking at in the days, and weeks ahead – the role that Pakistan has played over the last 20 years but also the role we would want to see it play in the coming years and what it will take for it to do that,” he said.

Blinken also called on Pakistan to deny legitimacy to the Taliban unless they meet international demands.

“What we have to look at is an insistence that every country, to include Pakistan, make good on the expectations that the international community has of what is required of a Taliban-led government if it’s to receive any legitimacy of any kind or any support,” Blinken told the House Foreign Affairs Committee.

He said the priorities included ensuring the Taliban let out people who want to leave Afghanistan and respect the rights of women, girls, and minorities, as well as adhere to promises that the country not again becomes “a haven for outward-directed terror.”

“So Pakistan needs to line up with a broad majority of the international community in working toward those ends and in upholding those expectations,” Blinken said.

Blinken said Pakistan’s policies have been “on many occasions detrimental to our interests, on other occasions in support of those interests.”

During the hearing, Blinken insisted the Biden administration had prepared for worst-case scenarios in Afghanistan, as irate lawmakers accused the White House of presiding over a historic disaster.

The famously even-tempered top US diplomat stayed cool as he faced the toughest grilling of his career at the first congressional hearing on President Joe Biden’s end to the 20-year war, which brought a swift victory by the Taliban.

As rival Republicans raised their voices, waved pictures of slain soldiers, and occasionally demanded he resigns, Blinken repeatedly noted that former President Donald Trump had set the withdrawal from Afghanistan.

“We inherited a deadline; we did not inherit a plan,” Blinken told the House Foreign Affairs Committee.

After Trump’s February 2020 deal with the Taliban and drawdown of US troops, the movement was in the “strongest military position it had been since 9/11,” the attacks 20 years ago that prompted America’s longest war, Blinken said.

Blinken said the Biden administration was “intensely focused” on the safety of Americans and had been “constantly assessing” how long the Western-backed government could survive.

“Even the most pessimistic assessments did not predict that government forces in Kabul would collapse while US forces remained,” Blinken said.

“The evacuation itself was an extraordinary effort — under the most difficult conditions imaginable — by our diplomats, by our military, by our intelligence professionals.”

Blinken, however, suggested that the Taliban violated the accord through their “relentless march,” even as the Trump administration pressed the former Afghan government to free battle-hardened fighters.

The United States and its allies ultimately evacuated 124,000 people out of Afghanistan, one of the largest airlifts in history.