Sanctions could extend to foreign governments, including Pakistan, that US believes were and are supporting Taliban 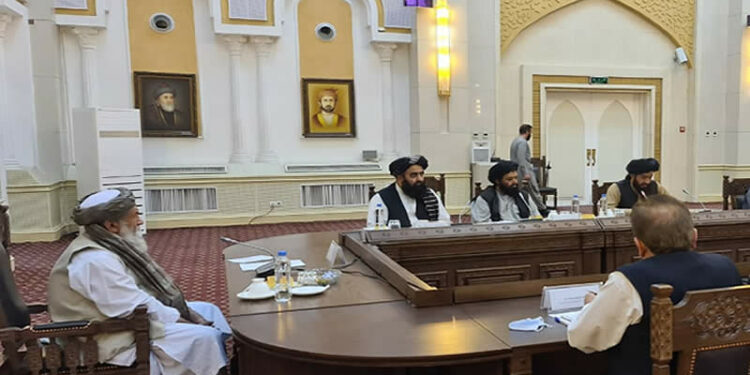 courtesy via the express tribune

A group of high-profile US senators – including a former presidential nominee – has moved a bill in the US Senate seeking imposition of sanctions on the Afghan Taliban that could also potentially extend to Pakistan. The bill, titled ‘Afghanistan Counterterrorism, Oversight, and Accountability Act’, triggered an angry rebuke from a senior member of Pakistan’s cabinet.

The 22 lawmakers, all from the Republican Party, introduced the bill on Monday that requires “the imposition of sanctions with respect to the Taliban and persons assisting the Taliban in Afghanistan, and for other purposes.”

The proposed legislation also seeks to review and suspend assistance to and potentially impose sanctions on any foreign government the US believes was or is supporting the Taliban. It singles out Pakistan by name in the section that calls for a report on “entities providing support for the Taliban”.

The bill was introduced by Senator Jim Risch, the representative for the state of Idaho and a ranking member of the US Senate Foreign Relations Committee who has previously co-sponsored acts imposing sanctions on Turkey and making it a federal crime for Americans to encourage or participate in boycotts against Israel and Israeli settlements in the West Bank.

The bill was co-sponsored by 21 other senators, including Mitt Romney, who ran against former president Barack Obama during his re-election bid, and Marco Rubio, who lost out in the primaries for the 2016 US presidential election.

Although the bill sponsors say it is primarily aimed at addressing the “outstanding issues related to the Biden administration’s rushed and disastrous withdrawal from Afghanistan,” a significant portion is aimed at imposing punitive measures against the Taliban and those the US concludes supported and enabled them.

Official press releases published on websites of some of the bill’s sponsors stated that the bill seeks to “establish a State Department task force to focus on the evacuation of American citizens, legal permanent residents, and Afghan Special Immigrant Visas (SIVs) still stuck in Afghanistan; impose oversight mechanisms on the processing of SIVs and refugees; require strategies for counterterrorism and for the disposition of Taliban-captured US equipment; sanction the Taliban and others in Afghanistan for terrorism, drug-trafficking, and human rights abuses; authorise sanctions on those providing support to the Taliban, including foreign governments supporting the Taliban; call for a comprehensive review of foreign assistance to entities that support the Taliban; [and] place restrictions on non-humanitarian foreign assistance to Afghanistan.”

Regarding foreign governments and non-state groups, the bill itself states “the Secretary of State, in consultation with the appropriate congressional committees, shall conduct a comprehensive review of all forms of United States foreign assistance provided to or through the government of any country or any organisation providing any form of material support to the Taliban.”

In a separate section, it adds “the Secretary of State, in consultation with the Secretary of Defense and the Director of National Intelligence, shall submit to the appropriate congressional committees a report on entities providing support to the Taliban.”

Lashing out at the bill on Twitter, Pakistan’s Human Rights minister said: “So again Pakistan will be made to pay heavy price for being an ally of US in its “War on Terror” as a bill is introduced in US Senate in aftermath of the US’s chaotic Afghan withdrawal followed by collapse of ANA and Ashraf Ghani’s flight to UAE.”

So again Pak will be made to pay heavy price 4 being an ally of US in its "War on Terror" as a Bill (see pp 25-26) is introduced in US Senate in aftermath of the US's chaotic Afghan withdrawal followed by collapse of ANA & Ashraf Ghani's flight to UAE. https://t.co/PQFQyYkEN2

“Twenty years of presence by economically and militarily powerful US & NATO left behind chaos with no stable governance structures. Pakistan now being scapegoated for this failure. This was never our war; we suffered 80,000 casualties, a decimated economy, over 450 drone attacks by our US ‘ally’ and disastrous fallout of these attacks on our tribal people and area,” she said in another tweet.

“US Senate should do serious introspection: Where did $2 trillion disappear? Why did the heavily-invested-in ANA simply dissolve? Who asked Pakistan to free TTA [Tehreek-e-Taliban Afghanistan] leadership? Who signed Doha agreement with TTA and hosted them in DC?” the minister urged. “Enough is enough. It is time for those powers who were present in Afghanistan to look to their own failures instead of targeting Pakistan which paid a heavy price in lives lost, social and economic costs, refugees – all for being an ally and suffering constant abuse, in a war that wasn’t ours.”

Enough is enough. It is time for those powers who were present in Afghanistan to look to their own failures instead of targeting Pak which paid a heavy price in lives lost, social & econ costs, refugees – all for being an ally & suffering constant abuse, in a war that wasnt ours.

Speaking to The Express Tribune, analysts said the bill was an attempt to put both Pakistan and the Taliban under pressure, and yet another sign that the US relationship with Pakistan was purely transactional.

“We should think about our future transactions with Washington before signing up for them,” said Dr Talat Wizarat, former chairperson of Department of International Relations, University of Karachi. “I think, senior US officials who are due in Islamabad are going to make some big demands, and they are trying to pressurise us by putting this bill before us. We should not fall into this trap again.”

US Deputy Secretary of State Wendy Sherman will travel next month to Pakistan, according to the State Department. Sherman, after CIA chief Bill Burns, will be one of the first high-level officials under President Biden to visit Pakistan where she will meet senior officials on October 7-8.

According to defence analyst Inamul Haque, the inclusion of Pakistan in the bill by name could be a way to caution both Islamabad and the Taliban. “It could be a message to the Taliban. If you think you can survive without our support, we can cut off your supporters too,” he said. “Not just that, it may be a message for China and Russia as well.”

That said, Inam mainly saw domestic politics at play with the bill. “Sentiments in the US are very negative at the moment. The people are angry, as are many in the government and deep state. The American defeat is a very big disgrace for a superpower and it is very hard for them to gulp it down,” he said.

“In that respect, this bill and associated proceedings are mainly a way to satisfy those frustrations.”

Given that the Republican senators sponsored the bill, Inam also agreed that it could be an attempt to pile more pressure on Biden. Even so, he did not rule out other influences at play. “We cannot discount Indian influence, by way of their media misinformation, diaspora and the Indian caucus. The reference to Panjshir may be a ploy to put pressure, but could even be on account of some senators who bought the Indian misinformation,” he said.

Both Wizarat and Inam agreed that any sanctions on Pakistan were likely to make little difference this time around. “We survived the 90s, when we were really dependent on the US. Now not so much. Any sanctions now will have serious implications for residual US influence in the region instead,” Inam said.

Wizarat said that US decision-makers are about to make the same mistake they made in the 80s. “I can only say we are not living in that era anymore. Washington needs to take Pakistan very seriously and this relationship can no longer be the way it has been for decades.”

She added that Pakistan’s relationship with the US has always been weak and transactional. “They have always treated Pakistan as a disposable item in this transaction. I think Pakistan must go to its friends and allies now, and try to find a way around this without succumbing to US pressure.”

Re-evaluations in the US

Speaking to VOA Deewa on Monday, Senator James Risch, who introduced the bill in the Senate, said that there have “already been lengthy discussions between the administration and the Congressional people as to what our role in Afghanistan and Pakistan is going to be going forward.”

“We’ve got a long relationship with Pakistan, not all of it particularly pleasant on our side. I’ve met personally with part of the administration in Pakistan and both of us agreed there were things each of us could and couldn’t do because of our domestic politics,” he claimed. The senator added that at present, the US administration is “hammering out where they want to go” and “I think it will take some meetings between the secretary of state, others, and the Pakistani government to see what we could do that is in the best interests of both.”

His comments came after US Secretary of State Antony Blinken announced earlier this month that the US is going to be looking at its ties with Pakistan in the coming weeks to formulate the role it wants Islamabad to play in the future of Afghanistan. “We are going to be looking at in the days and weeks ahead, the role that Pakistan has played over the last 20 years, but also the role that we would want to see it playing in the coming years,” he told Congress on September 14.

On the topic of the US recognizing the Taliban, Senator Risch said, “my recommendation to the administration is we wait and see, how they perform before we give any recognition at all.” Regarding China opting to recognize the Taliban government, he said, “I wouldn’t be surprised if China does represent the Taliban. Their views on human rights are not that far off. I wouldn’t be surprised at all if China plays an active role in trying to influence and exert some control over Afghanistan.”