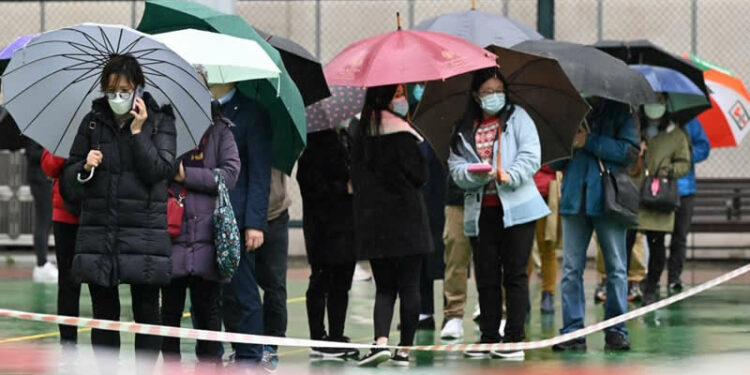 The densely populated metropolis is in the throes of a record virus surge with thousands of confirmed cases every day as hospitals and isolation units run out of space.

On Tuesday, Chief Executive Carrie Lam revealed a doubling down of the city’s strict zero-Covid approach to bring the response much closer to mainland China’s as she admitted that local authorities had failed to stamp out the current surge.

“This quickly worsening epidemic has far exceeded the Hong Kong government’s ability to tackle it, so there is a great need for the central government’s support in fighting the virus,” she told reporters.

The head of Beijing’s Liaison Office Xi Baolong was coordinating the mainland’s response from the border city of Shenzhen, she added.

Under the new rules, all 7.4 million residents will have to go through three rounds of compulsory testing in March, although Lam did not give a start date.

The tests will be spread out over a number of days with residents also having to take multiple rapid antigen tests every day at home in between.

“Those who do not take the universal test will be held liable,” Lam warned.

Schools and multiple businesses such as gyms, bars and beauty salons will remain closed into late April with education facilities turned into local testing centres.

Flights from nine countries including Britain and the United States will remain banned.

Lam also confirmed that Hong Kong will continue to aim for isolating all coronavirus patients, including asymptomatic patients, in temporary facilities which are being built with the help of Chinese authorities.

“We reiterate that isolation is still our policy objective,” she said.