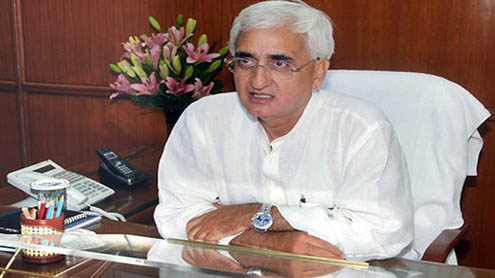 India is prepared to give historic rival Pakistan “the benefit of the doubt” as the two countries strive for peace, Foreign Minister Salman Khurshid has said.

The nuclear-armed neighbours have since independence been at loggerheads over Kashmir, which is divided and administered separately by India and Pakistan but claimed in full by both. India regularly accuses Pakistan’s army of providing covering fire for armed rebels who cross the border and then mount attacks and in an interview with The Australian newspaper published Monday, Khurshid admitted the relationship was fraught.

“We talk to Pakistan periodically and in terms of personal gestures we receive great warmth,” he said. “But the on-the-ground reality and the results of our meetings are very disappointing.” However, with Prime Minister Nawaz Sharif last month vowing to go the “extra mile” to make peace with India, Khurshid said Delhi would take him at his word. “Pakistan has a lot of very, very difficult issues to deal with at home,” he was quoted as saying. “Our view is that we should give them time, not at our cost, of course, but that we should give them the benefit of the doubt.

When Mr Nawaz Sharif says he wants peace and good relations with India, we take him at his word.” But with recent shootings at the border among the heaviest since a ceasefire agreement in 2003, Khurshid pointed out that Pakistan has not yet followed through on its promise of top-level military meetings to sort out better arrangements in Kashmir. “If they can address the dismantling of the infrastructure of terrorism, that would be a good start,” he told the newspaper. -Dawn