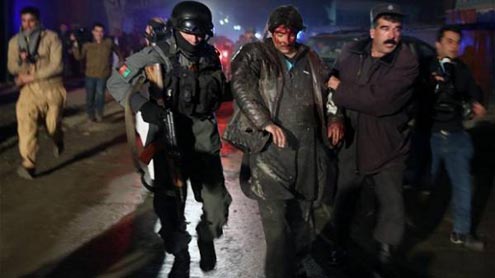 A suicide bomber blew himself up at the entrance of the interior ministry in central Kabul on Wednesday, killing at least four police officers just three days before the presidential election, officials said. Afghanistan is on high alert after Taliban insurgents vowed to target officials, election staff and voters in a campaign of violence to demonstrate their opposition to the US-backed polls. “The suicide attacker wearing a military uniform detonated himself near the gate of the ministry killing four policeman,” interior ministry spokesman Sediq Sediqqi told.

He said that the attack came in an annex to the ministry, which is one of the most closely-guarded buildings in the Afghan capital. A repeat of the bloodshed that marred the 2004 and 2009 elections would damage claims by international donors that the expensive 13-year US-led intervention has made progress in establishing a functioning Afghan state.  -Samaa.tv