by Top
in Asia, Featured
0 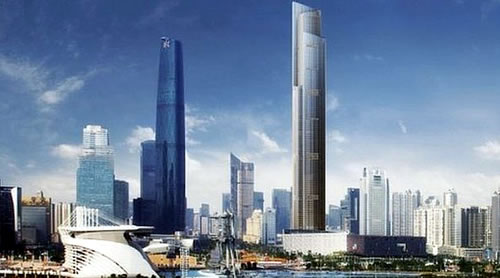 Hitachi has said it will install a lift capable of reaching speeds of 72km/h (45mph) into a skyscraper in Guangzhou, southern China.


The lift, the fastest in the world, would take 43 seconds to go from the first to 95th floor in the Guangzhou CTF Financial Centre, the company said. The skyscraper is scheduled to be completed in 2016. Currently, the Taipei 101 building in Taiwan holds the record for fastest lift – it can travel up to 60.6km/h.

Hitachi promised a “comfortable ride” even at high speeds in the new lift. The lifts would prevent ear blockages, Hitachi said, by artificially altering air pressure in the car.

Dr Gina Barney, an expert in lift technology, said protecting passengers from discomfort was a big challenge for high-speed lifts. “When you’re travelling that distance, you’re going to get pressures on your ears changing,” she told the media. “That’s probably the most significant problem with high-speed travel in buildings – people suffer some pain.”

Hitachi said guiding “rollers” that adapted to warping caused by wind pressure would mean the ride remained smooth. And brakes able to resist extreme heat would activate in the “unlikely” event of a malfunction. The building will have in total 95 lifts, two of which will be operate at the ultra-high speed.

Twenty-eight “double-decker” lifts will also be installed into the building. The Guangzhou CTF Financial Centre will house office, hotel and residential space.

If the Hitachi lift performs as well as the company has said, it will comfortably top the global chart for fastest lift. Today’s record is held in Taiwan, where passengers in the Taipei 101 building are flung from the fifth to the 89th floor in 37 seconds, a speed of 1,010m (3,313ft) per minute. The Yokohama Landmark Tower in Japan moves its passengers at 750m per minute, while the world’s tallest building, Dubai’s Burj Khalifa, has a lift that moves at 600m per minute.

London’s Shard, the tallest building in Western Europe, has lifts that move at 360m per minute.- BBC