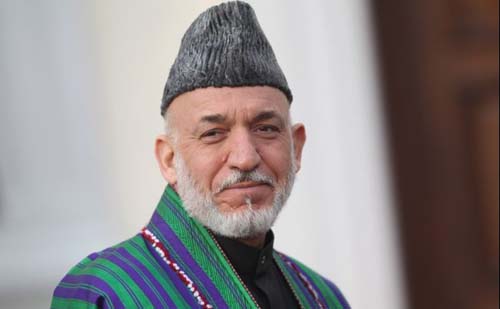 Outgoing Afghan President Hamid Karzai on Tuesday blamed the United States for his country’s long war, a final swipe at the country that helped bring him to power 13 years ago but towards which he has become increasingly bitter.

His farewell speech came days ahead of the planned swearing in of a new president, Ashraf Ghani, after months of potentially violent crisis over a disputed election that ended in a power-sharing deal, yet to be tested, with rival Abdullah Abdullah.

Karzai blamed both the United States and neighbouring Pakistan for the continuing war with the Taliban-led insurgency and warned the new government to “be extra cautious in relations with the US and the West”. The conflict kills thousands of Afghans each year and has claimed the lives of more than 2,200 American and other international forces in Afghanistan. “One of the reasons was that the Americans did not want peace because they had their own agenda and objectives,” Karzai said. He did not elaborate, but in the past has suggested continued violence has been an excuse for the United States to keep bases in the country. He also accused Pakistani power players of trying to control Afghanistan’s foreign policy.

“Today, I tell you again that the war in Afghanistan is not our war, but imposed on us and we are the victims,” Karzai said. “No peace will arrive unless the US or Pakistan want it.” “My advice to the next government is to be very careful with America and the West. We can be friends with them, but we want equal benefits,” he said. In recent years, Karzai has sharply denounced the United States for the deaths of Afghan civilians in air strikes and for holding suspected Afghan militants prisoner without trial. The relationship deteriorated to near breaking point this year, when Karzai refused to sign a key security pact with the United States. He said he had travelled to Pakistan, where much of the Taliban’s leadership is believed to be based, at least 20 times seeking a negotiated end to the war, but his efforts were thwarted. Neither the US nor the Pakistani embassies in Kabul had immediate comment on Karzai’s speech.

Karzai has been in power since 2001 after being plucked from virtual obscurity by the United States following the overthrow of the Taliban’s government for sheltering Al-Qaeda’s terrorist leadership after the 9/11 attacks on the US. The deterioration of his relationship with the West was seen by some as an effort to shape his legacy as an independent leader rather than a US puppet as maintained by the Taliban. Karzai was barred by the constitution from running for a third term this year.  Ghani and his poll rival Abdullah Abdullah struck an agreement Sunday to form a “unity government”, ending months of disputes over who was the rightful winner of the fraud-tainted June 14 presidential election.

Ghani will officially become president at an inauguration ceremony on Monday, officials confirmed, with dignitaries invited from around the world to attend Afghanistan’s first democratic transfer of power. The Afghan capital has been the target of regular suicide attacks launched by Taliban insurgents, and it is uncertain how many world leaders will fly in for the event. In the last major attack, a week ago, three NATO soldiers were killed when a suicide car bomber hit a military convoy travelling on the main road from Kabul airport to the US embassy. The Taliban dismissed the election process and the power-sharing deal as a US plot to control Afghanistan. -nation