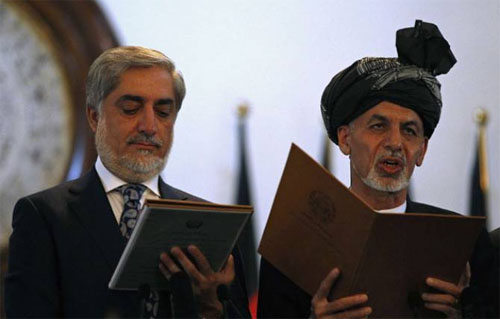 US President Barack Obama called Kabul last Sunday to congratulate Afghan presidential contenders Ashraf Gani and Abdullah Abdullah for finally accepting a power-sharing deal to resolve a months-long dispute over who won in an election deeply marred by fraud.

Afghans are not so sure though. Many express relief that the threat of a descent into chaos or civil war has been averted and they hope that day-to-day business activities will resume after months of paralysis. Still, most Afghans fear that this cobbled-together government – in which Gani has been declared winner and president but Abdullah Abdullah has been given an extra-constitutional prime minister-style post – will prove even worse than the unpopular regime of outgoing President Hamid Karzai. Built as it is on a foundation of electoral fraud and elite bargains, the new government is likely to be at least as corrupt and even more fractured and contested than the Karzai government.

Those weaknesses will invite further inroads by the Taliban, which has regained ground over the last six months, fighting pitched battles and both killing and enlisting frightened locals. ‘This isn’t an inclusive government,’ says Shafiullah Afghan, a former police officer and rule-of-law expert. ‘It’s a joint venture.’ Indeed, one of the ironies of the power-sharing deal, brokered and co-signed by US officials, is that it negates the value of what so many Americans hailed as a triumph on the first day of voting: The overwhelming turnout. Surprising even themselves on April 5, Afghans flocked to cast their votes. Braided ropes of villagers and city-dwellers wove down steep hillsides and along muddy streets, or clogged thoroughfares in cities shut down for the day. [contentblock id=2 img=adsense.png]

In separate women’s queues, voters could only be distinguished by the colour of the burkas – and the names on the voter cards they clutched in their hands. In Kabul, it was a holiday celebration, as people waiting in queue exuberantly called out greetings to friends and neighbours, as they do on annual feast days. In Kandahar – whereas during the last presidential election, in 2009, members of my soap-making cooperative were the only ones among their friends who voted, and scrubbed the tell-tale ink of their fingers immediately afterward – this year everyone voted. ‘For the first time ever,’ said local radio reporter Sarwar Amani, ‘they ran out of ballot papers!’ Contrary to one common western myth, in other words, Afghans are not unwilling or unready to accept democracy. They crave it.

Massive participation Many western observers read the high participation as having ‘delivered a resounding … defeat to the Taliban,’ in the words of the Washington Post. In fact, that ballot had a more sophisticated political significance: It represented an explicit repudiation of Karzai. He was widely believed to have placed his support – and the levers of state power he controlled – behind his longtime confidant Zalmai Rassoul. And, by the hundreds of thousands, Afghans voted against Rassoul for precisely that reason. ‘We knew that if people didn’t come out to vote, Karzai would be able to throw this election to Rassoul,’ said Hajji Mohammad Rahim, a shopkeeper in Karzai’s fiefdom of Kandahar. ‘And that would mean another five years of Karzai’s regime.’ Rassoul’s loss demonstrates the success of that strategy: So massive was the participation that it overwhelmed even the ability of Karzai’s practised vote-stealing machine to fix the results.

However, that does not mean the elections were honest. While international attention was primarily focused on the enthusiastic turnout, blatant violations of electoral laws marred the first round and proved to be the dominant factor in the second. Many Afghans describe the upshot as a betrayal of the whole notion of democracy. ‘We feel nothing is in our hand; it’s in the foreigners’ hand,’ one Kandahar grey-beard put it. ‘We voted for nothing. Votes should have value, but our vote doesn’t count in the end. Only force counts.’ The post-Karzai government, in other words, is facing a credibility crisis before it even gets going. ‘Whether it’s Gani or Abdullah,’ one NGO worker told me before last Sunday’s result, ‘it won’t be legitimate.’ The elite bargains that went into building the two contending camps and negotiating last Sunday’s deal also undermine chances for the type of profound governance reforms Afghans crave. ‘It’s a good system for corrupt people,’ said the NGO worker. ‘If a person is arrested, he can just claim the move was ethnically motivated and his camp will come to his defence.’

Meanwhile, the Ashraf Gani/Abdullah regime will be focused more on the spoils than on governance. Ultimately, the inauguration of a new Afghan president is unlikely to usher in much of a transition. Gani and Abdullah or his appointee will preside over a fractured, contested, corrupt government. Karzai, who played a Machiavellian role in the electoral process, may leave the front of the stage, but he will remain a background presence. As recent events in Iraq demonstrate so painfully, this is a ripe stew for extremist advances.–Gulf News

Govt Slashes Up to Rs2.95 off Petroleum Products