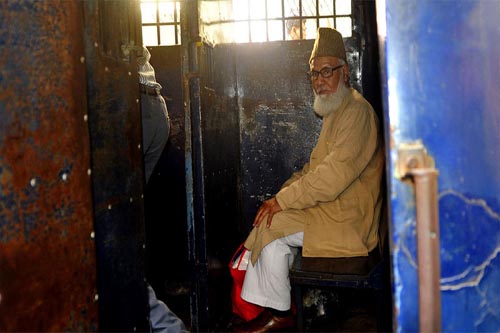 A special Bangladeshi court on Wednesday handed the death sentence to the leader of the country’s largest religious party for war crimes, in a long-awaited verdict that triggers fears of fresh violence.

The war crimes court found Motiur Rahman Nizami, head of the Jamaat-i-Islami party, guilty of mass murder, rape and looting during Bangladesh’s war of independence against Pakistan in 1971.

Head judge Enayetur Rahim sentenced Nizami to “hang by the neck until his death” for orchestrating the killing of top doctors and intellectuals during the conflict as head of a ruthless militia. “It’s a historic verdict,” chief prosecutor Haider Ali told reporters outside the packed and heavily guarded court in Dhaka. [contentblock id=2 img=adsense.png]Ali said Nizami, who became Jamaat’s leader in 2000 and was once a minister in a Jamaat-allied government, led the notorious Al-Badr militia “which took part in many heinous crimes”. Security was tightened across Bangladesh ahead of the verdict after similar judgements against several of Nizami’s senior lieutenants plunged the country into one of its worst crises last year.

Tens of thousands of Jamaat supporters fought with police and more than 500 people died in the unrest and subsequent political violence ahead of disputed polls in January. Jamaat called a called three-day nationwide strike starting on Thursday in protest at Nizami’s verdict.

Junior home minister Asaduzzaman Khan said before the verdict that “all sorts of security measures” had been taken across Bangladesh amid fears of a new bout of bloodletting. “We won’t tolerate any attempt to create instability or chaos,” Khan told reporters on Tuesday. While it was effectively banned from taking part in the legislative elections, Jamaat’s activists staged shows of strength on the streets of Dhaka and other cities in the aftermath of the previous verdicts. -dawn