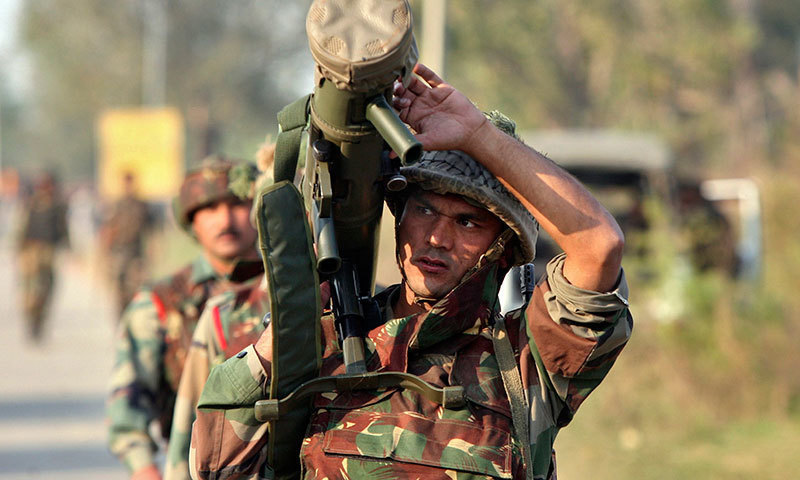 An army officer told The Associated Press the rebels hurled grenades and fired automatic rifles as they tried to enter an artillery unit of the camp in the Uri region before dawn, officials said. The sprawling camp, also the regional headquarters of the army’s artillery regiment, is near the heavily militarised line of control. Eight soldiers including a lieutenant colonel and three policemen were killed on the Indian side, police said. The officials spoke on condition of anonymity as they were not authorised to speak to media. The attackers struck days before Prime Minister Narendra Modi was due to visit Indian-held Kashmir, where thousands of extra paramilitary troops have been deployed for month-long local polls. “The firing has stopped right now,” the Indian police chief in Kashmir, K. Rajendra, said. “We’re searching and sanitising the area and clearing any unexploded grenades hurled by militants.” None of several rebel groups active in Indian-held Kashmir issued statements about Friday’s battle.

which erupted two days after a gun-battle broke out in the neighbouring Handwara region. Six suspected rebels and one Indian army officer were killed. Also Friday, government forces intercepted two suspected militants on the outskirts of Srinagar, the region’s capital city, leading to a brief exchange of gunfire, police said. One rebel was killed while the troops cordoned the area and were looking for the second suspect. Uri, home to a large army base housing several hundred soldiers, is around 100 kilometres northwest of Srinagar, where Modi is due to campaign on Monday. The Indian prime minister’s Bharatiya Janata Party (BJP) is staging a bold attempt to seize control of the Jammu and Kashmir legislature, a move unthinkable until very recently. The Hindu nationalist party has traditionally had no base in the Kashmir Valley, where residents’ resentment against Indian rule runs high.

Turnout was high for the first phase of voting in Jammu and Kashmir state on November 25, when more than 70 per cent of the electorate cast their ballots in 15 constituencies. But the polls have brought increased violence. Friday’s attack followed a major gun battle earlier this week in which an Indian soldier and six militants were killed. On Monday suspected rebels shot dead a village leader in an apparent attempt to disrupt the elections.

About a dozen rebel groups have been fighting Indian forces since 1989 for independence or to merge the territory with Pakistan. The fighting has left tens of thousands dead, mostly civilians. Most separatist leaders opposed to Indian rule were either arrested or confined to their houses after elections were announced. Many had called on people to boycott the polls. Jammu and Kashmir will vote in five phases, with results due on December 23. On Monday, Modi will address an election rally in Srinagar, a day ahead of the third phase of polling. -dawn