Kashmir Unrest: Death toll rises to over 40 in six days of clashes 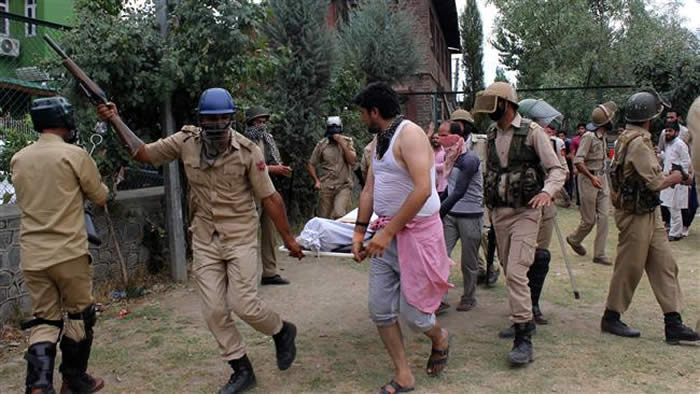 Kashmir Unrest: Death toll rises to over 40 in six days of clashes

Life remained suspended for the sixth consecutive day on Thursday in India-held Kashmir due to the shutdown called by local groups in protest against the deaths of protesters in clashes with Indian security personnel.

As the death toll from the deadly clashes rises to more than 40, since the killing of Hizbul Mujahideen commander Burhan Wani on Friday.

The pro-independence groups have also extended the shutdown by two more days until tomorrow (Friday). The chiefs of their factions of the All Parties Hurriyat Conference, Syed Ali Shah Geelani and Mirwaiz Umar Farooq, were detained by police after they defied restrictions and tried to lead protest marches.

In a letter to the United Nations Secretary General Ban Ki-Moon, Kashmiri leader, Ghulam Nabi Fai has stressed that the Kashmiris are demanding freedom on the streets, shedding their blood. When Indian forces announced last week that they had killed Burhan Wani, they clearly did not expect the backlash that followed – an outpouring of public anger, daily protests and dozens dead in the streets. The killing of Burhan Wani drew tens of thousands to rise up and renew demands for freedom, from Indian rule.