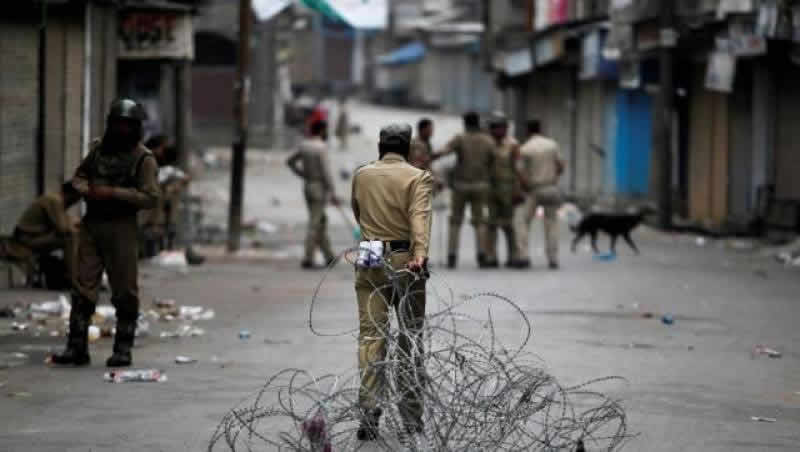 In occupied Kashmir, a youth was martyred in Srinagar due to teargas shell fired by Indian troops, reports and witnesses said, raising the death toll in the ongoing Kashmir Intifada to 87.

Irfan Ahmad, 25, of Fateh Kadal was killed at Malarata near Nowhatta when he was hit by a tear gas shell in his chest. He succumbed at the SMHS hospital, official said.

Meanwhile, Indian authorities continued to impose curfew and other restrictions in the territory for the 45th consecutive day, Monday. Indian troops have halted the entrance of vehicles in the valley carrying food items for the Kashmiris. Educational institutions, business centers, internet and mobile services are still closed in the area. On the other hand, All Parties Hurriyet Conference has announced to expedite the protests against India and has extended the strike till August 25. The occupied territory is on the boil since the extra-judicial murder of the top commander of Hizbul Mujahideen, Burhan Wani, by Indian troops on July 8.

Atleast 87 people have been killed while over 80,00 injured so far in the firing of bullets, pallets, and teargas shells on peaceful protesters by Indian troops and police personnel. It is being termed as the worst violence to hit the Himalayan region since 2010. Kashmir is split between India and Pakistan along a UN-monitored line of control, but both claim it in full and have fought two wars over its control. Freedom fighters have fought Indian security forces in Kashmir since 1989 for the independence of the region or for it to be made part of Pakistan. The conflict has left tens of thousands, mostly civilians, dead.