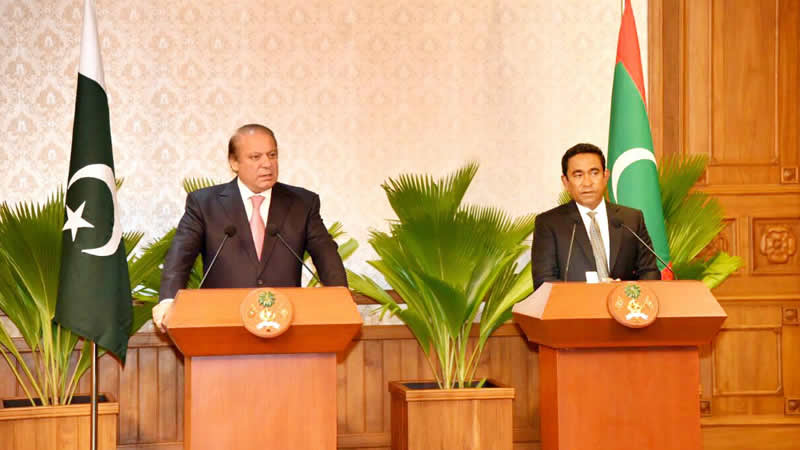 Prime Minister Muhammad Nawaz Sharif Tuesday emphasized the importance of economic cooperation, especially the need to enhance bilateral trade between Pakistan and Maldives, observing it was currently below its true potential.

The prime minister said this during a delegation level meeting with President of Maldives Abdulla Yameen Abdul Gayoom here at the President’s Office. He was assisted by Advisor to the Prime Minister on Foreign Affairs Sartaj Aziz, Senator Pervaiz Rashid, Pakistan Tourism Development Corporation Managing Director, President of Federation of Pakistan Chamber of Commerce and Industries and other senior officials.

The prime minister said Pakistan attached importance to its relations with the Maldives, which were characterized by cordiality, mutual respect and commonality of interests. He indicated that signing a number of memorandums of understanding on tourism, trade promotion, higher education and human resource capacity building would help further consolidate bilateral relations.

The establishment of Pakistan- Maldives Joint Business Council would not only promote trade but also investment in different sectors, he added. The prime minister also highlighted possibilities of cooperation in other sectors, including defence, health, education, sports, fisheries, tourism and culture. The two leaders agreed that the South Asian Association for Regional Cooperation (SAARC) could provide a conducive and congenial atmosphere to build economic synergies and transform the quality of life of the peoples of South Asia.

Pakistan, the prime minister said, was committed to the SAARC charter and wished to see SAARC as a vibrant regional organization. He said Pakistan was deeply concerned over the global environmental issues and in particular, the threat that global warming posed to the island nations such as the Maldives. Pakistan was ready to cooperate with the Maldives in the field of climate change, he added. Prime Minister Nawaz Sharif also held a one-to-one meeting with the President of Maldives wherein he thanked the president for the warm welcome and the invitation to attend the 52nd Independence Day of Maldives.