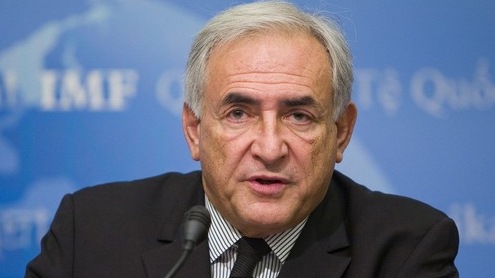 The claims come at a sensitive time for President Sarkozy as he seeks re-election in a second-round vote.Mr Strauss-Kahn abandoned plans to run after he was accused of rape last year.He did not claim in the interview that the sexual encounter with New York hotel maid Nafissatou Diallo was the result of a set-up.But he did suggest that the subsequent handling of events was orchestrated to ensure he was publicly shamed.”Perhaps I was politically naive, but I simply did not believe that they would go that far… I didn’t think they could find anything that could stop me,” he told The Guardian.These claims were first put forward by US journalist Edward Jay Epstein in the New York Review of Books last November. Mr Epstein also conducted the interview.

The BBC’s High Schofield in Paris says there will be some scepticism about what Mr Strauss-Kahn has to say, but with the second round of the French presidential election taking place in just over a week, the allegations come at a difficult time for Mr Sarkozy.He is well behind his Socialist rival Francois Hollande in the polls.Before the events of May 2011, Dominique Strauss-Kahn was the leading contender to be the Socialist party’s candidate in the presidential election.Although the criminal case against him was dropped, the affair sank his hopes of running for the French presidency and forced him to resign as head of the IMF.

In March of this year, Mr Strauss-Kahn was also placed under formal investigation in France over alleged involvement in a prostitution ring.He has admitted attending parties where the authorities believe prostitutes were provided by a gang, but denies knowing that they were prostitutes.Mr Sarkozy’s UMP party has previously denied any allegations it was involved in a plot against Mr Strauss-Kahn. – BBC