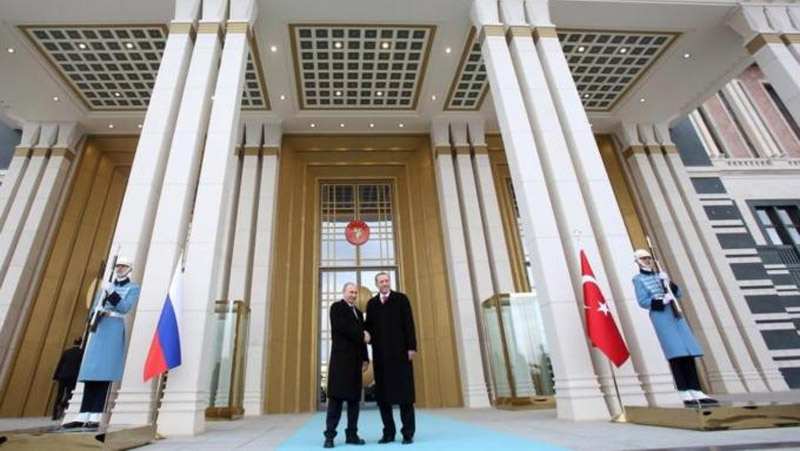 The leaders of Russia and Turkey have signed a series of major trade and energy deals in the Turkish capital amid differences over the crises in Syria and Ukraine as Moscow copes with Western sanctions. Vladimir Putin, Russia’s president, said at a news conference in Ankara that Russia would reduce the gas price for Turkey by six percent, starting next year, and agreed to supply it with an additional three billion cubic metres. Putin also announced Moscow was scrapping the South Stream natural gas pipeline project – that would avoid Ukrainian territory to deliver Russian gas to Europe – because of the European Union’s opposition to it. “Taking into account the fact that until now we have not received permission from Bulgaria, we believe that in the current conditions Russia cannot continue with the realisation of this project,” Putin said. Russia might cooperate with Turkey on building a gas hub for southern Europe instead, Putin said.

Turkey and Russia have set an aim of increasing their two-way trade volume from $33bn to $100bn by 2020. Russia provides the bulk of Turkey’s gas and is set to build Turkey’s first nuclear power plant. Turkish construction firms are active in Russia while millions of Russian tourists travel to Turkey each year. Putin and Recep Tayyip Erdogan, Turkey’s president, set aside their differences on foreign policy to make the trade boost happen. Russia remains Syrian leader Bashar a;-Assad’s closest ally, while Turkey supports Syria’s opposition forces. Erdogan makes no secret of his desire to see Assad deposed.

Turkey has also been a strong advocate of the Tatar community in the Russia-annexed Crimean Peninsula and has publicly supported Ukraine’s territorial integrity. Barred by Russian authorities from Crimea, Tatar leaders who strongly opposed the annexation are feted in Turkey.  On Monday, a Crimean Tatars’ solidarity group staged a protest at a park near Turkey’s parliament in Ankara to protest against Putin’s visit. About 50 children from the Caucasus region, including from Chechnya, also demonstrated in Istanbul, the state-run Anadolu Agency reported. -aljazeera