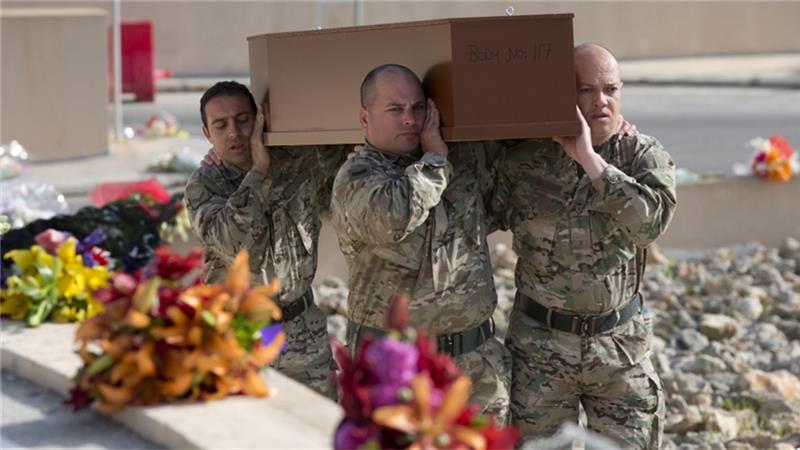 European Union leaders have committed extra ships, planes and helicopters to save lives in the Mediterranean at an emergency summit convened in Brussels after hundreds of migrants drowned in the space of a few days.

Meeting on Thursday, leaders from the 28-nation bloc also said they were discussing laying the ground for military action against traffickers. Germany and France pledged two ships while Britain committed three to move into the Mediterranean, and other member states also lined up more vessels and helicopters that could be used to rescue migrants, officials said. The member states also agreed to triple funding to $9.7m a month for the EU’s border operation that patrols the Mediterranean. Al Jazeera’s Laurence Lee, reporting from Brussels, said that while the Triton border-control operation can rescue people, its main purpose is to stop people getting to Europe.

“The message coming out loud and clear from the EU was that the priority was to stop people getting on the boats in the first place,” our correspondent said, adding that French President Francois Hollande had committed to going to the UN to seek approval to attack smugglers’ boats on the Libyan coast. Human rights organisations expressed their disappointment in the EU’s announcement. Amnesty International said that Triton’s operational area must be extended to the “high seas” where most of the migrant deaths occur.

What we witnessed today in Brussels was a face-saving not a life-saving operation,” said John Dalhuisen, Amnesty’s Director for Europe and Central Asia. The emergency summit came as victims of the Mediterranean’s worst-ever migrant disaster were buried in the island nation of Malta on Thursday. Two dozen caskets containing the only bodies recovered from the weekend capsizing that left an estimated 800 dead were laid out for a memorial service on the grounds of the country’s main hospital. None of the bodies was identified. One casket had “No 132” scrawled on it, referring to the number of the DNA sample taken from the corpse in case a relative ever comes to claim it.

The bodies were later buried at the island nation’s largest cemetery. David Cameron, the British prime minister, said the UK would contribute the navy’s flagship, HMS Bulwark , along with three helicopters and two border patrol ships to the EU effort. “As the country in Europe with the biggest defence budget we can make a real contribution,” he said, but added that this would not include accepting a share of the refugees.