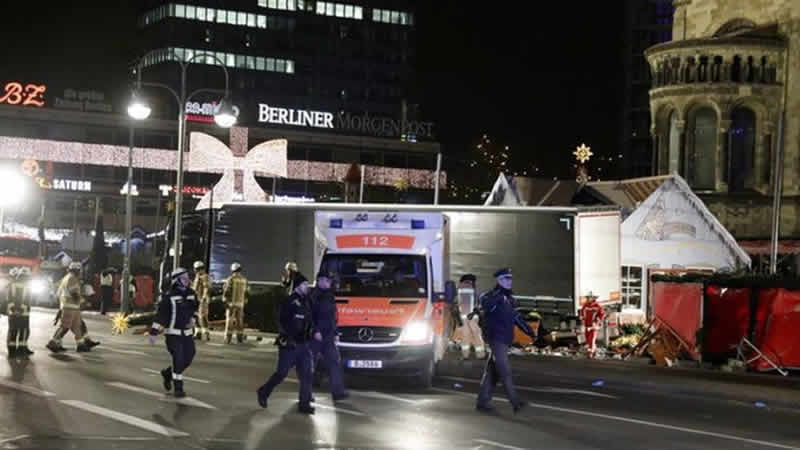 A lorry ploughed into a busy Christmas market in Berlin on Monday, killing at least 12 people and injuring dozens more in what police said was a suspected terror attack.

Ambulances and heavily armed police rushed to the area after the vehicle mounted the pavement of the market in a square popular with tourists, in horrific scenes reminiscent of July’s deadly truck attack in the French Riviera city of Nice. I don’t want to use the word ‘attack’ yet, although there are many things pointing to one,” Interior Minister Thomas de Maiziere told public television. As witnesses described scenes of panic and carnage, police said at least 12 people were killed and 48 others were injured in the incident, which came less than a week before Christmas.

Australian Trisha O’Neill told the Australian Broadcasting Corporation she was only metres from where the truck smashed into the crowded market. I just saw this huge black truck speeding through the markets crushing so many people and then all the lights went out and everything was destroyed. I could hear screaming and then we all froze. Then suddenly people started to move and lift all the wreckage off people, trying to help whoever was there.” O’Neill said there was “blood and bodies everywhere”.

‘We mourn the dead’

A German police spokeswoman told AFP that a man who was apparently driving the truck had been detained while the passenger was dead. Police later identified the passenger as a Polish national. The daily Tagesspiegel said the man was known to police but for minor crimes, not links to terrorism. The Polish owner of the lorry confirmed his driver was missing. We haven’t heard from him since this afternoon. We don’t know what happened to him.

He’s my cousin, I’ve known him since I was a kid. I can vouch for him,” transport company owner Ariel Zurawski told AFP. Lukasz Wasik of the same company said contact was lost with the 37-year old at around 3 pm (1400 GMT). German authorities said there was no indication of “further dangerous situations in the city near Breitscheidplatz”, where the suspected attack took place. We are investigating whether it was a terror attack but do not yet know what was behind it,” a police spokesman said. Chancellor Angela Merkel reacted quickly to the incident, with spokesman Steffen Seibert tweeting: “We mourn the dead and hope that the many people injured can be helped.”

Traditional Christmas markets are popular in cities and towns throughout Germany and have frequently been mentioned by security services as potentially vulnerable to attacks. It’s awful. We were in Berlin for Christmas,” said American tourist Kathy Forbes.

We also thought it would be safer than Paris.” The crash happened in the shadow of the Kaiser Wilhelm Memorial Church whose damage in a World War II bombing raid has been preserved as a reminder of the horrors of war for future generations. The square is at the end of the Kurfuerstendamm boulevard, which was packed with holiday shoppers. Police said the truck made it as far as 80 metres (yards) into the Christmas market before it came to a halt.

Europe has been on high alert for most of 2016, with terror attacks striking Paris and Brussels, while Germany has been hit by several assaults claimed by the Islamic State group and carried out by asylum-seekers. An axe rampage on a train in the southern state of Bavaria in July wounded five people, and a suicide bombing left 15 people injured in the same state six days later. In another case, a 16-year-old German-Moroccan girl in February stabbed a police officer in the neck with a kitchen knife, wounding him badly, allegedly on IS orders. The arrival of 890,000 refugees last year has polarised Germany, with critics calling the influx a serious security threat.

The attack in Berlin comes five months after Tunisian extremist Mohamed Lahouaiej Bouhlel ploughed a truck into a crowd on the Nice seafront, killing 86 people. In response to the suspected attack in Berlin, France beefed up security at its own Christmas markets. The French share in the mourning of the Germans in the face of this tragedy that has hit all of Europe,” President Francois Hollande said. The Nice bloodshed as people were watching a fireworks display on the Bastille Day holiday on July 14 further traumatised a France already reeling from a series of jihadist attacks. The United States labelled Monday’s incident an apparent “terrorist attack” and pledged its support. President-elect Donald Trump blamed “Islamist terrorists” for a “slaughter” of Christians in the German capital. -arynews